1804 Ainslie City Plan or Map of Edinburgh and Leith, Scotland 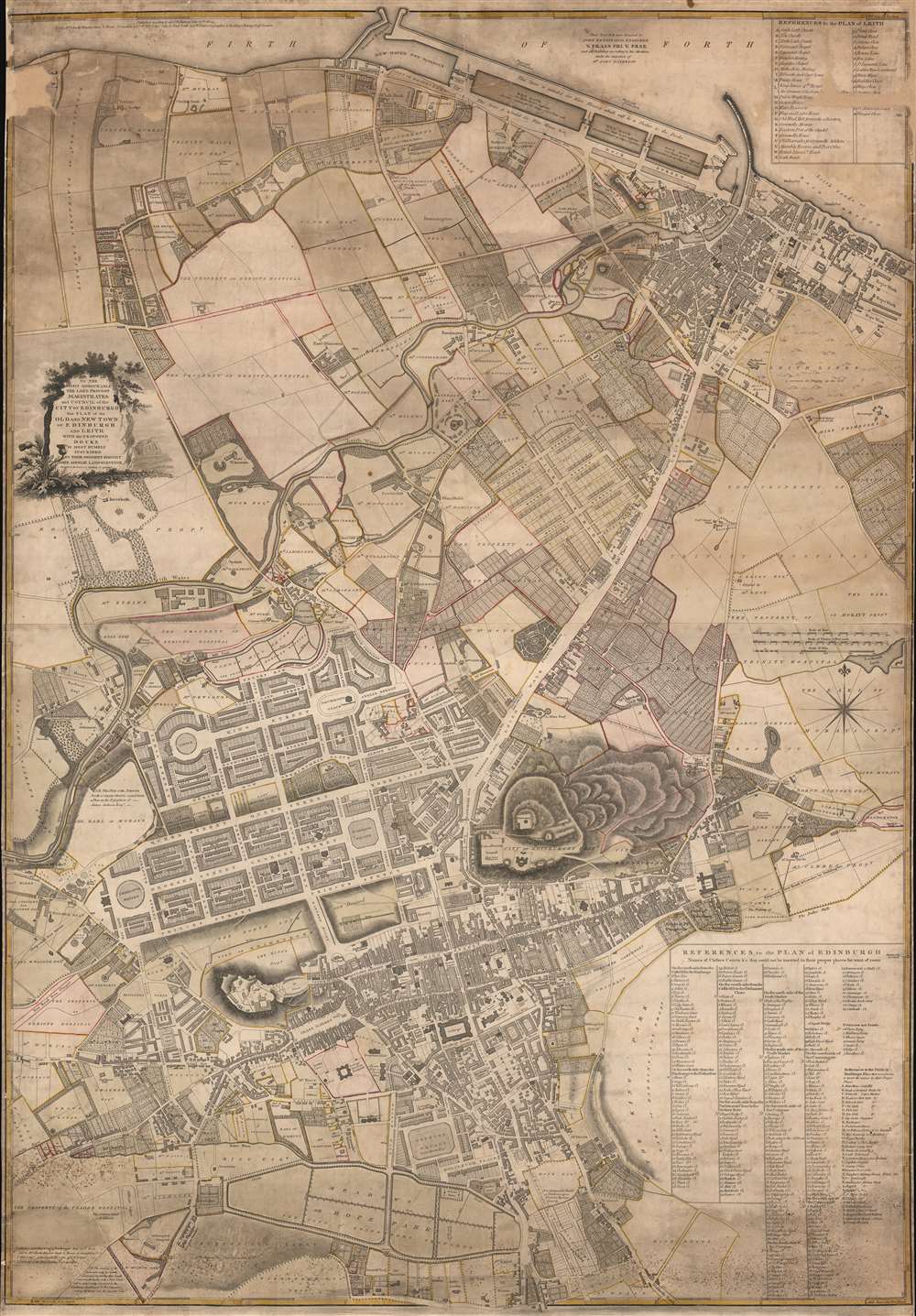 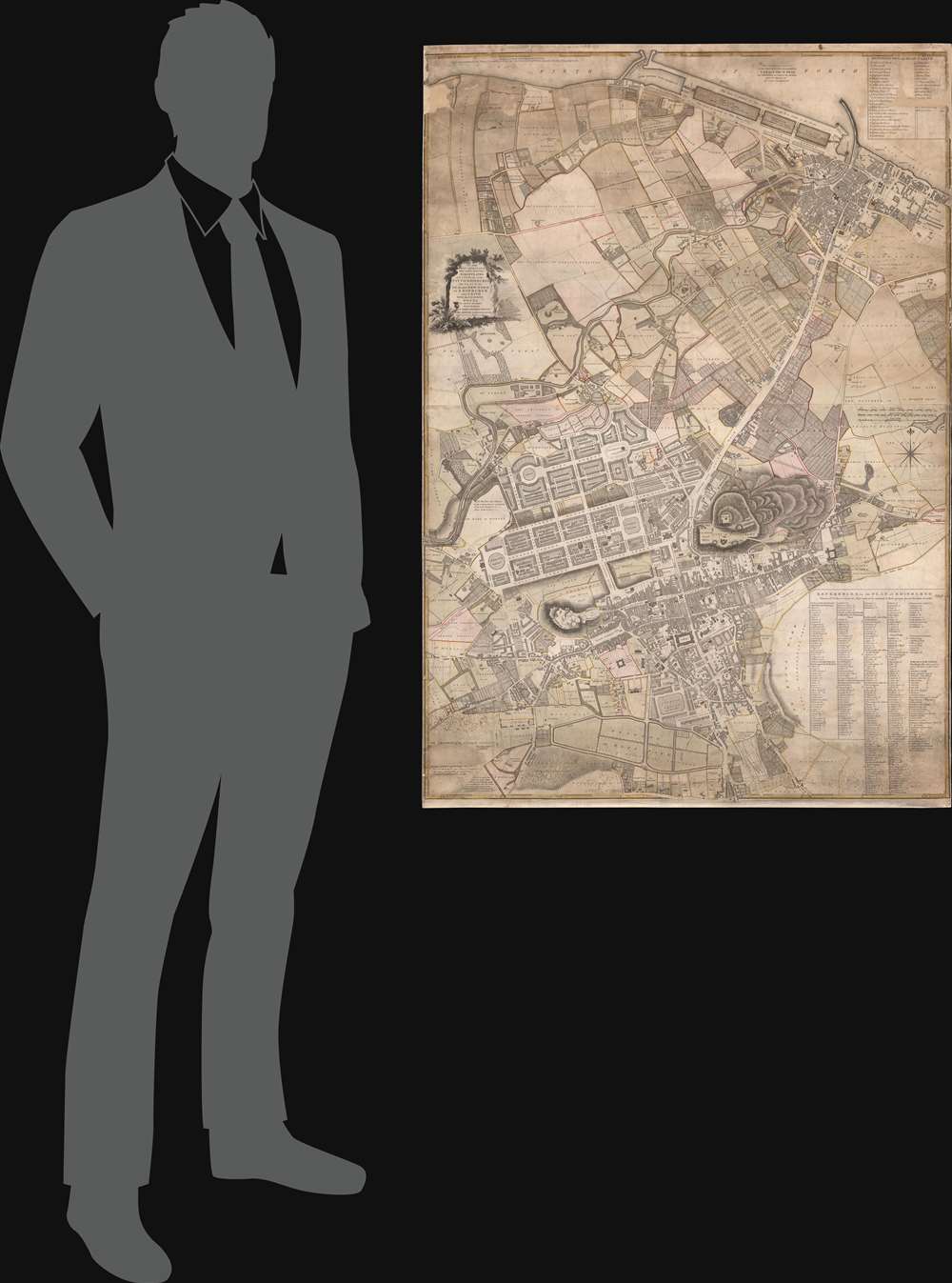 1804 Ainslie City Plan or Map of Edinburgh and Leith, Scotland

This is a rare 1804 John Ainslie city plan or map of Edinburgh and Leith, Scotland - prepared on the cusp of the major Second New Town expansion. The map depicts the Edinburgh from the Firth of Forth south to The Meadows, offering striking detail in both the Old Town and New Town. Edinburgh Castle, Carlton Hill, and the North Loch are prominently illustrated, with grid structure of New Town striking against the Old Town warren. Georges Street, Queen Street, and Princes Street are prominently labeled, along with Charlotte Square and St. Andrew's Square. Tracts of land owned by the Trader's Hospital, Heriots Hospital, Trinity Hospital, and innumerable private land owners are illustrated, labeled, and outlined.

The settlement of Edinburgh developed around a medieval stronghold, achieving a royal charter in the 12th century. Edinburgh became Scotland's capital by the mid-14th century. The Old Town is the medieval part of the city and has maintained its street plan and Reformation-era buildings to the present day. Nonetheless, by the mid-18th century, Edinburgh had gained a reputation as a 'dirty' city and bubonic plague, cholera, and typhus were daily hazards. The city was also overcrowded, with visitors shocked by the tight quarters. In 1766, the architect James Craig, then twenty-six years old, won a design competition for the creation of a new settlement, forever to be known as New Town. Craig's plan employed a grid layout, public gardens, and other Enlightenment urban planning innovations. The new neighborhood's street names honored King George and his family and were meant to celebrate the Union between Scotland and England. North Loch was drained (although that took until the 1820s) and Edinburgh's wealthy moved to the elegant streets of New Town.

Begun around the time this map was published, Northern or Second New Town, extended the city north of Queen Street. This development, completed in 1830, expanded on Craig's popular grid design. Ainslie includes a note stating that 'this plan of the Newtown North of Queen Street is copied from a Plan in the Possession of James Jackson Esq.', suggesting that Ainslie did not know exactly how this new development might look when completed.

This map was created and published by John Ainslie in 1804. Extremely rare. A single other example is cataloged in OCLC as part of the institutional collection at The British Library. No others known.

John Ainslie (April 22, 1745 - February 29, 1828) was a Scottish surveyor and cartographer. Born in Jedburgh in the Scottish Borders, Ainslie was the son of John Ainslie, the town druggist. He was likely educated at the local Grammar School, which had a very good reputation at that time. In 1762 Ainslie was apprenticed to Thomas Jefferys Sr, Geographer to King George III. Ainslie learned the mechanics of the map and print trade from Jefferys, including engraving, surveying, and mapmaking. The latter two skills would bring Ainslie renown later in life. While apprenticed to Jefferys, Ainsle held a leading role in Jefferys' large-scale maps of English counties, surveying Bedfordshire, Buckinghamshire, Cumberland, and Yorkshire, before Jefferys' death in in 1771. Ainslie returned to Scotland following Jefferys' death and opened his own publishing and land surveying firm in Edinburgh. Over the course of the next fifty-plus years, Ainslie produced and impressive corpus of maps, plans, charts, and books. His greatest achievement was a nine-sheet wall map of Scotland, first published in 1789. William Faden, James Wyld, Daniel Lizars, and James Gardener all published their own maps of Scotland based on Ainslie's work. Ainslie also produced important charts of the Scottish coast for His Majesty's Inspector of Customs, plans of Edinburgh and environs (including Leith), and maps of several Scottish counties. Ainslie also worked as a surveyor on several canal projects. In 1812 he published a book entitled A Comprehensive Treatise on Land-Surveying', comprising the theory and practice in all its branches, which became a celebrated textbook on surveying. Ainslie married Mary Lookup with whom he had two daughters, Catherine and Mary. Learn More...

Good. Mounted on linen. Exhibits areas of loss and infill in the upper left and right corners, including in the reference table for Leith. Tight margins.