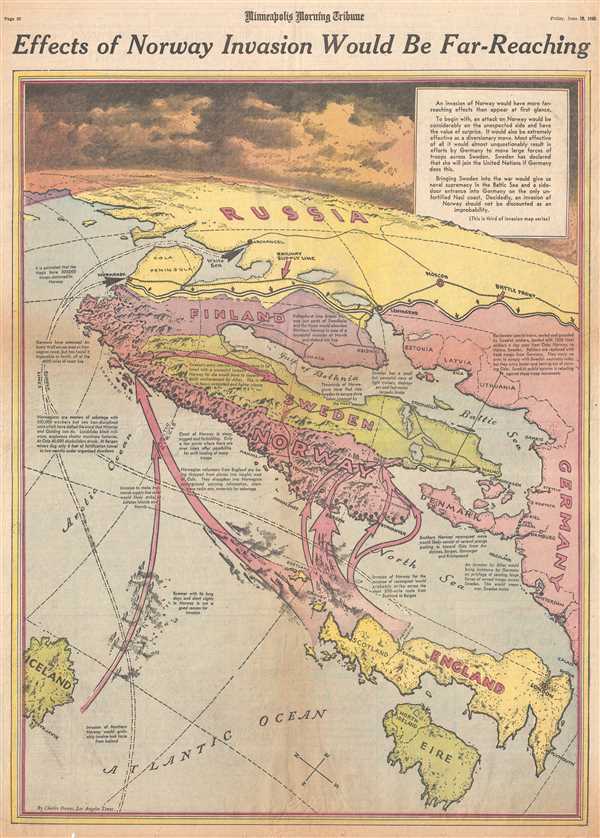 This is a Friday, June 18, 1943 Charles Hamilton Owens and Minneapolis Morning Tribune map of the possible Allied invasion of Norway. The map depicts the region from the Arctic Ocean and Iceland to Germany and from Russia to Ireland. During the summer of 1943, following the surrender of Axis forces in North Africa, nearly everyone in the world was waiting to see what the Allies next move would be. Everyone knew that Stalin had been calling for a second front in Europe to ease pressure on Soviet forces in Russia, but no one knew for sure where, or when, that second front would materialize. Hitler had fortified nearly the entire coastline of northern and western Europe, but still had to play a guessing game of where the Allies would strike next. One option, as illustrated here, was to invade Norway. As Owens notes, not all of the Norwegian coast had been fortified by the Nazis, but it also presented natural barriers in the form of steep cliffs. Only certain areas along the Norwegian coast provided adequate landing zones. Owens also states repeatedly that an invasion of Norway would force Germany to transport large numbers of troops across Sweden, which the neutral Swedish had already stated would force them to join the Allied cause, giving Germany yet another variable to watch. While in hindsight the option of an Allied invasion of Norway may appear outlandish, one of the most important factors in the successful Allied landings in Sicily and in Normandy was successfully forcing Germany and her allies to position troops throughout Europe. This meant that there was never an overwhelming concentration of Axis forces in any one location, which allowed for a higher probability of success in any future Allied landing operation.

When Charles Hamilton Owens drew this map, he was doubtless inspired by the work of Richard Edes Harrison, an American illustrator and cartographer who, working for Fortune magazine, pioneered a new style of representing the world for WWII era propaganda maps. Edes developed the convention of using spherical perspective with an exaggerated vertical dimension, as on the present map, to illustrate part of the world as part of a greater global situation. This map was drawn by Charles Hamilton Owens and published in the Minneapolis Morning Tribune on Friday, June 18, 1943.