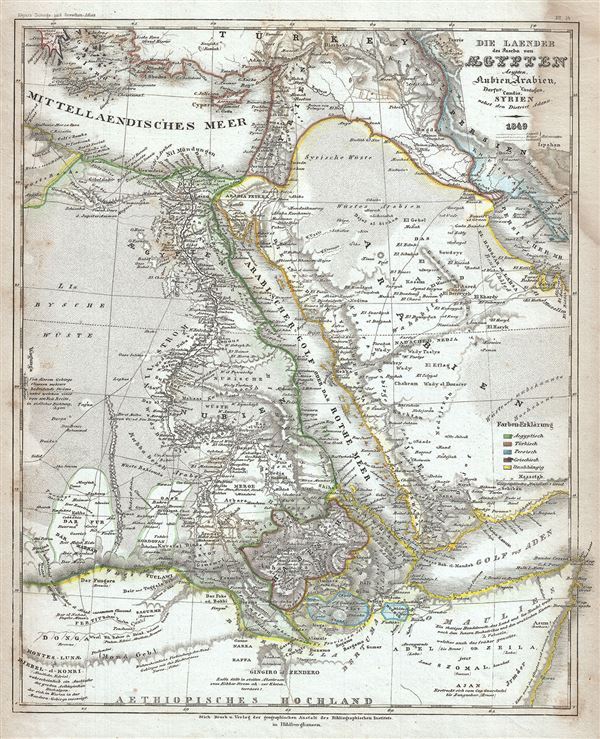 This is an attractive 1849 map of Egypt and Arabia by Joseph Meyer. It covers from Greece and the Aegean Islands south as far as modern day Ethiopia and east as far as the Quatar. The map is color coded to show Egyptian, Turkish, Persian, Greek and independent territories. Numerous cities, towns, roads, deserts, mountains and other topographical features are noted throughout.

This time in history marks the decline of the Ottoman empire and its hegemony over this region. After the conquest of Palestine by Muhammad Ali's Egypt in 1832, British intervention returned control of Palestine to Ottoman rulers in 1840. In Egypt, following the expulsion of the Napoleonic forces by the Ottoman Mamluk Turks, Muhammad Ali, the Ottoman viceroy of Egypt, established the Mamluk dynasty that would rule Egypt until the Egyptian Revolution of 1952. Between 1820 and 1833, Ali annexed northern Sudan, Syria and parts of Arabia into the Mamluk Empire. In 1848 Abbas I, his grandson, was ruler of Egypt and Sudan. Abbas I, who spent most of his time in seclusion on the insistence of the British government, was responsible for the construction of the historic railway from Alexandria to Cairo.

This map was issued as plate no. 14 in Meyer's Zeitung Atlas. Although all the maps in this atlas are not individually dated, the title page and maps were often updated while the imprint with the date was not, causing confusion to the exact date for some of the maps. Moreover some maps in the atlas were taped in at a later date as an update to the atlas. We have dated the maps in this collection to the best of our ability.

Very good. Minor overall toning and some spotting. Large dampstain upper left quadrant.
Looking for a high-resolution scan of this?