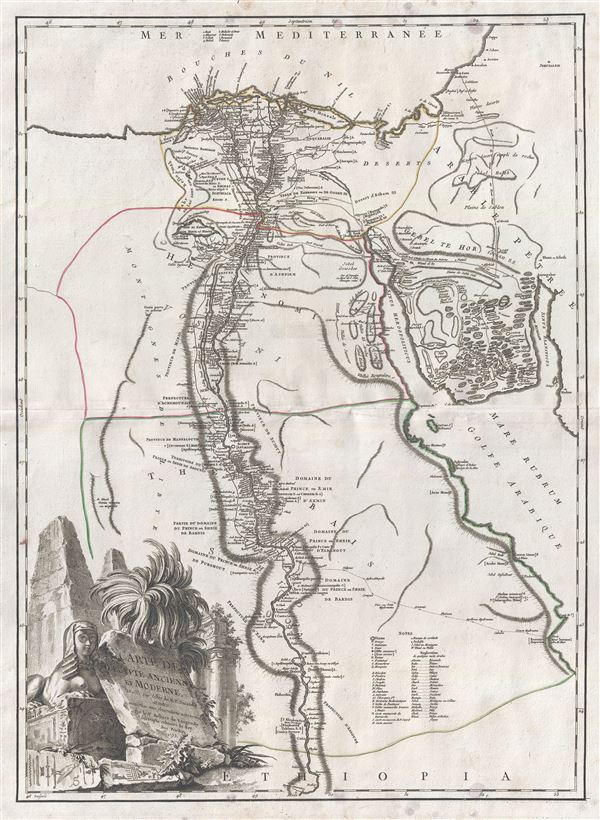 This is an exceptional 1753 map of Egypt by Rober de Vaugondy. Centered in the Nile River Delta, the map covers Egypt and part of the Red Sea. Details various Sheikdoms, Prefectures and Provinces throughout along with several ancient towns and oases along the Nile. The important ancient caravan route from the Red Sea port of Berenice to Coptos (Qift) is noted. The pyramids near Memphis are also identified. Several other important towns, mountains, rivers and other topographical details are noted.

Possibly this map's most interesting aspect is its presentation of the ancient Lake Moeris (Lacus Moeris), now just a small lake called Birket Qarun and the legendary 'Labyrinth.' The lost Labyrinth was described by many classical authors including Herodotus, Strabo, Diodorus and Pliny. A sprawling megalithic complex designed by Imandes for the Pharaoh Amenemhet III, the Labyrinth is believed to have contained thousands of rooms filled with hieroglyphs and ancient Egyptian sculptures. Herodotus wrote about it in the fifth century B.C.:

Furthermore, they resolved to leave a memorial of themselves in common, and in pursuance of this resolve they made a labyrinth, a little above Lake Moeris, and situated near what is called the City of the Crocodiles. I saw it myself and it is indeed a wonder past words; for if one were to collect together all of the buildings of the Greeks and their most striking works of architecture, they would all clearly be shown to have cost less labor and money than this labyrinth. Yet the temple at Ephesus and that in Samos are surely remarkable. The pyramids, too, were greater than words can tell, and each of them is the equivalent of many of the great works of the Greeks; but the labyrinth surpasses the pyramids also. It has 12 roofed courts, with doors facing one another, 6 to the north and 6 to the south and in a continuous line. There are double sets of chambers in it, some underground and some above, and their number is 3,000; there are 1,500 of each. We ourselves saw the aboveground chambers, for we went through them so we can talk of them, but the underground chambers we can speak of only from hearsay. For the officials of the Egyptians entirely refused to show us these, saying that there were, in them, the coffins of the kings who had built the labyrinth at the beginning and also those of the holy crocodiles. So we speak from hearsay of these underground places; but what we saw aboveground was certainly greater than all human works. The passages through the rooms and the winding goings-in and out through the courts, in their extreme complication, caused us countless marvelings as we went through, from the court into the rooms, and from the rooms into the pillared corridors, and then from these corridors into other rooms again, and from the rooms into other courts afterwards. The roof of the whole is stone, as the walls are, and the walls are full of engraved figures, and each court is set round with pillars of white stone, very exactly fitted. At the corner where the labyrinth ends there is, nearby, a pyramid 240 feet high and engraved with great animals. The road to this is made underground.

Such was the labyrinth; but an even greater marvel is what is called Lake Moeris, beside which the labyrinth was built. The circuit of this lake is a distance of about 420 miles, which is equal to the whole seaboard of Egypt. The length of the lake is north and south, and its depth at the deepest is 50 fathoms [300 feet]. That it is handmade and dug, it itself is the best evidence. For in about the middle of the lake stand 2 pyramids that top the water, each one by 50 fathoms [300 feet], and each built as much again underwater; and on top of each there is a huge stone figure of a man sitting on a throne. So these pyramids are 100 fathoms [600 feet] high, and these 100 fathoms are the equivalent of a 600-foot furlong, the fathom measuring 6 feet, or four cubits (the cubit being six spans). The water in the lake is not fed with natural springs, for the country here is terribly waterless, but it enters the lake from the Nile by a channel; and for 6 months it flows into the lake, and then, another 6, it flows again into the Nile. During the 6 months that it flows out, it brings into the royal treasury each day a silver talent for the fish from it; and when the water flows in, it brings 20 minas a day.

Several archeological surveys have been undertaken to unearth the labyrinth, but so far no findings have been confirmed.

A highly decorative title cartouche depicting a sphinx and pyramids appears in the bottom left quadrant. Drawn by Robert de Vaugondy and published in the 1757 issue of his Atlas Universal. The Atlas Universal was one of the first atlases based upon actual surveys. Therefore, this map is highly accurate (for the period) and has most contemporary town names correct, though historic names are, in many cases, incorrect or omitted.

Rumsey 3353.097. Pedley, Mary Sponberg Belle et Utile: The Work of the Robert de Vaugondy Family of Mapmakers, 431.
Looking for a high-resolution scan of this?