1852 Dufour Map of Egypt and Palestine 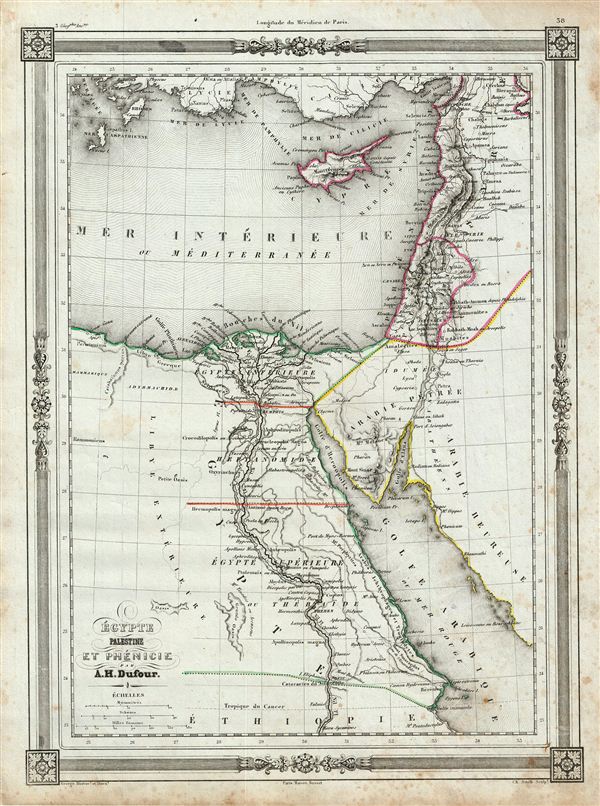 1852 Dufour Map of Egypt and Palestine

An uncommon and extremely attractive 1852 map of egypt and Palestine. Covers from Syria to ethiopia. Includes egypt, Cyprus, Arabia, Palestine and part of Syria. The title identifies Phoenicia, an ancient civilization which covered most of what is today Lebanon, Israel and Syria. Throughout, the map identifies various cities, towns, rivers and assortment of additional topographical details. This time in history marks the decline of the Ottoman empire. After the conquest of Palestine by Muhammad Ali's egypt in 1832, British intervention returned control of Palestine to the Ottoman rulers in 1840. In egypt, following the expulsion of the Napoleonic forces by the Ottoman Mamluk Turks, Muhammad Ali, the Ottoman viceroy of egypt, established the Mamluk dynasty that would rule egypt until the egyptian Revolution of 1952. Between 1820 and 1833, Ali annexed northern Sudan, Syria and parts of Arabia into the Mamluk empire. In 1848 Abbas I, his grandson, was ruler of egypt and Sudan. Abbas I, who spent most of his time in seclusion, on the insistence of the British government, was responsible for the construction of the railway from Alexandria to Cairo. The map features a beautiful frame style border. Prepared by A. H. Dufour for publication as plate no. 38 in Maison Basset's 1852 edition of Atlas Illustre Destine a l'enseignement de la Geographie elementaire.