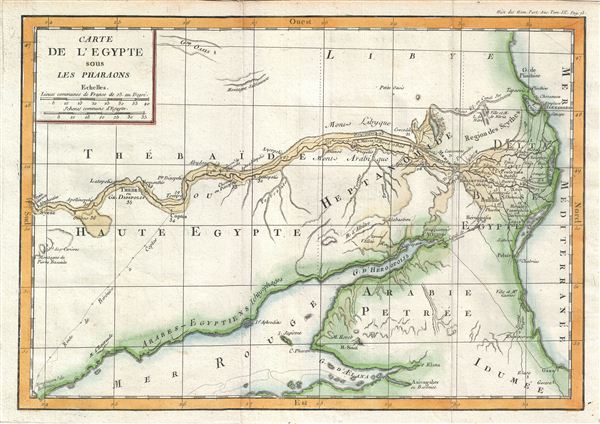 This is a fascinating example of the 1770 Jean-Baptiste-Claude Delisle de Sales' historical map of Egypt. The map depicts Egypt under the rule of the Pharaohs and, centered on the Nile Valley, covers from the Mediterranean Sea to the Elephantine Island. The Canal of the Pharaohs, an ancient tunnel linking the Nile to the Red Sea, is here named Canal de Ptolemae. The important ancient caravan route from the Red Sea port of Berenice to Coptos (Qift) is noted. The pyramids and catacombs near Memphis are also identified. Several other important towns, mountains, rivers and other topographical details are noted. This map was issued as part of Delisle de Sales' Histoire des hommes. Partie de l'Histoire Ancienne. Becasue most of Sales' work was burnt under the censorship of heresy, this volume is exceedingly rare.