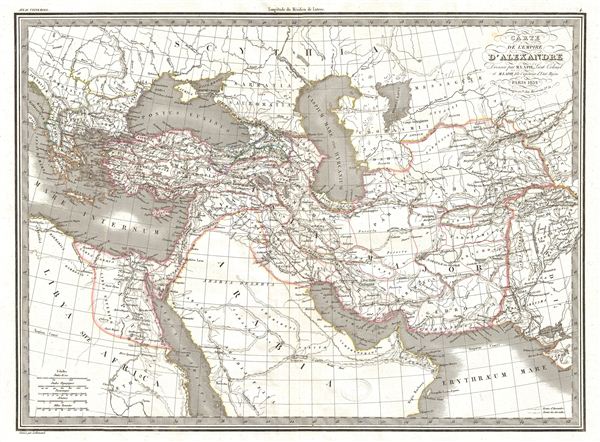 A fine first edition example of M. Lapie's 1832 map of the conquests of Alexander the Great. The map covers from Alexander's homeland in Macedonia eastwards past Asia Minor and Persia as far as India and south to include egypt and most of Arabia. Both the Caspian Sea and the Black Sea (Pontus euxinus) are included. Lapie's map offers fine detail throughout with elevation rendered by hachure and political boundaries demarcated with outline hand color. This map depicts the conquests of the Macedonian King Alexander III, called ‘the Great,' conqueror of the Persian empire and at just thirty, ruler of one of the largest empires in history. Alexander the Great was undefeated in battle and is considered one of the most successful military commanders of all time. This map was engraved by Armand Joseph Lallemand as plate no. 4 in the first edition of M. Lapie's important Atlas Universel. This map, like all maps from the Atlas Universel features an embossed stamp from the Lapie firm.