1756 Vaugondy Map of the German Empire 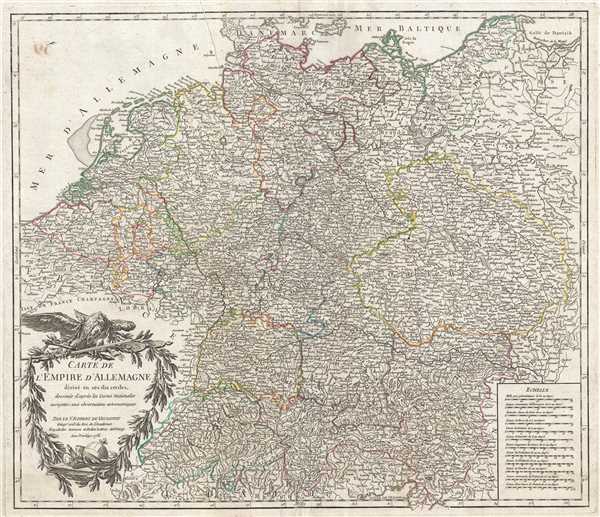 1756 Vaugondy Map of the German Empire

This is a 1756 Gilles Robert de Vaugondy map of the German Empire. The map depicts the German Empire divided into various imperial circles, duchies, and states. The Circles of Westphalia, High and Low Saxony, and Bavaria are depicted, as well as Bohemia and Silesia am others. These regions are bordered by Belgium, the Netherlands, France, Prussia, Poland, Denmark, Hungary, Italy and Switzerland. The borders between these political entities are depicted in gorgeous old color. Several interesting regional labels are worth mentioning, including the Republic of Venice and Champagne, Alsace, and Lorraine in France. The German Sea and the Baltic Sea are labeled. Innumerable cities and towns cover the map, including Munich, Prague (Prag), Geneva, and Frankfurt (Francfort). An elaborate title cartouche is presented at the lower left, dominated by an eagle holding a sword and a religious staff in it talons. The title is surrounded in laurels and, at the bottom, a crown and orb are depicted, perhaps referring to the many different principalities depicted on the map.