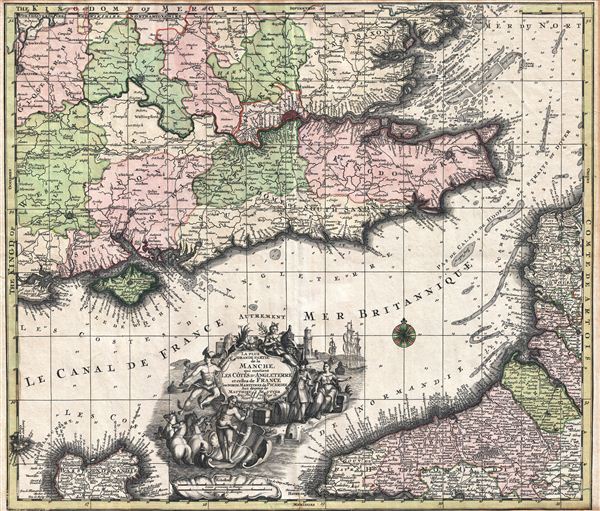 A highly decorative c. 1730 map of the english Channel, southeastern england, and the coasts of Normandy by Matthius Seutter. The map covers southeastern england, including London and the full length of the Thames River, from Gloucester and Salisbury to the Straits of Dover and from Oxfordshire to the Isle of Wight. The coasts of Normandy are covered from Calais to Havre De Grace. Seutter's map combines elements of both nautical charts and traditional maps, with depth soundings and shading to indicate undersea dangers throughout the english Channel, North Sea, and Straits of Dover. An elaborate allegorical title cartouche appears at bottom center. The cartouche features Greek deities including Poseidon and Hermes, as well as merchants, honey bees, and trade vessels.

This map first appeared in various Seutter composite atlases in the 1730s. The present example is exceptionally vivid, suggesting an early impression from the plate. The plate was subsequently updated and reused by Seutter's successor, Conrad Lotter, in the 1770s. Most latter impressions are extremely weak due to plate overuse.

Very good. Original centerfold. Margins narrow. Blank on verso.
Looking for a high-resolution scan of this?