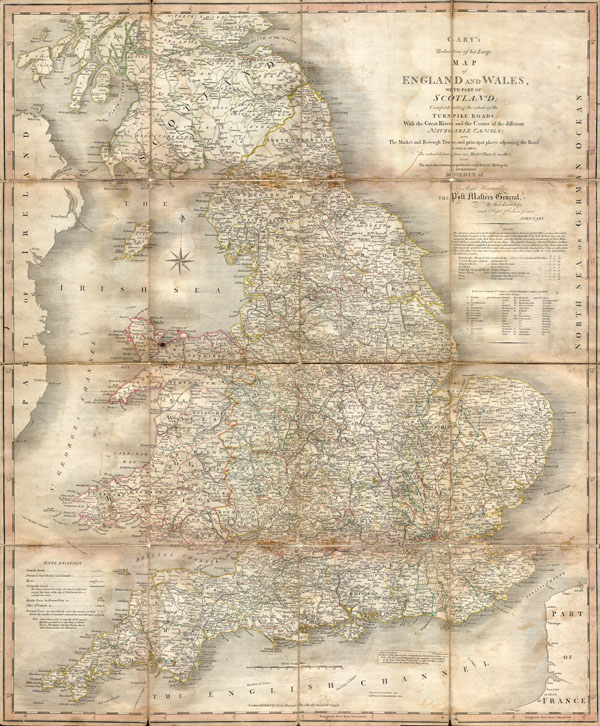 Cary’s Reduction of his Large Map of England and Wales, with part of Scotland; Comprehending the whole of the Turnpike Roads, With the Great Rivers and the Course of the different Navigable Canals: also The Market and Borough Town, and principal places adjoining the Road. To which is added, the Actual distance from one Market Town to another, with The exact admeasurement prefixed to each from the Metropolis. Published by Order of, and Dedicated with Permission to The Right Honorable the Post Masters General, by their Lordships, much Obliged & Obedient Servant, John Cary.
1796 (dated)     30 x 24 in (76.2 x 60.96 cm)

An important 1796 Case Map of England, Wales and the Southern part of Scotland by John Cary. This is in fact a reduction of Cary's seminal and enormous large format map of England and Wales produced a few years previously. Map depicts the region in impressive detail with special attention to matters of trade and transport – roads, tolls, bridges, canals, etc. Dissected into 16 sheets and mounted on linen. Dated at base, Feb 20, 1796.

Good condition. Some age toning, especially on the folds. Dissected into 16 sections and mounted on linen for easy folding – as issues. Reinforcement of original linen backing on verso. Minor water damage to verso.