1861 Johnson Map of England and Wales 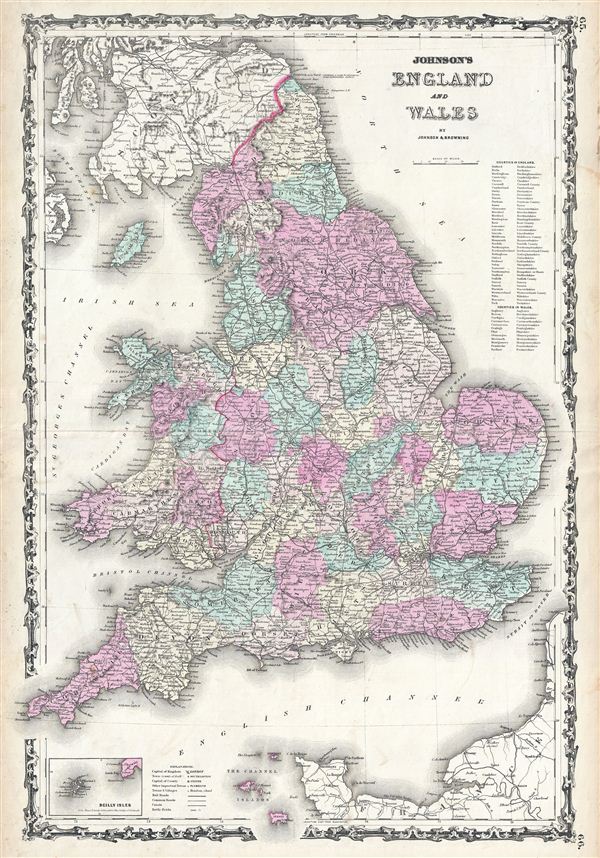 1861 Johnson Map of England and Wales

This is a beautiful example of A. J. Johnson and R. Browning's 1861 map of england and Wales. The map covers both england and Wales in full from Scotland south to the english Channel and The Channel Islands, and from St. George's Channel to the mouth of the Thames River, including the Isle of Man. In the upper right hand quadrant there is a list of counties in england and Wales, respectively. The lower left hand quadrant features an inset of the Scilly Isles. During the middle part of the19th century, both england and Wales were in the midst of the Industrial Revolution wherein much of the rural agricultural population relocated to urban centers. The map is color coded according to regions and notes several towns, cities, rivers, and various other topographical details with relief shown by hachure. It features the strapwork style border common to Johnson's atlas work from 1860 to 1863. Published by A. J. Johnson and Browning as plate nos. 65 and 66 in the 1861 edition of Johnson's New Illustrated Family Atlas. This is the last edition of the Johnson Atlas to bear the 'Johnson and Browning' imprint. Subsequent editions reflect Ward's 1862 acquisition Ross C. Browning's shares in the firm.