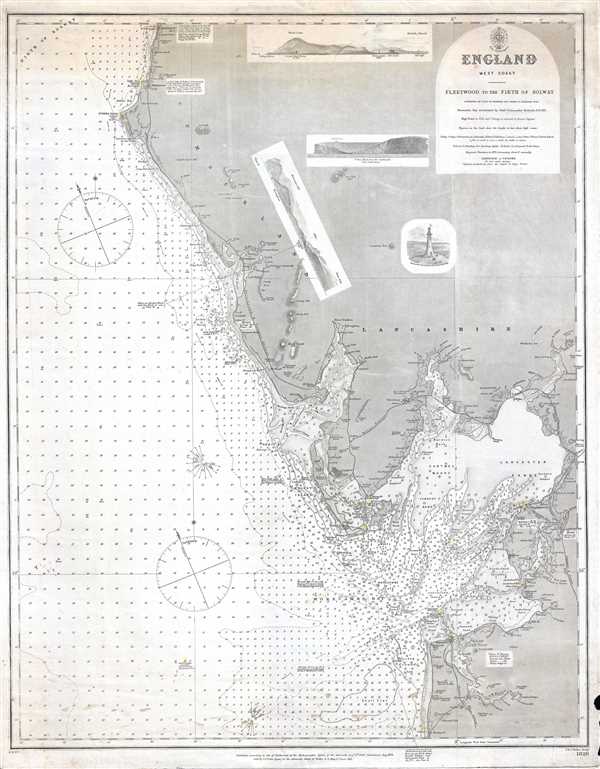 Depicts the Western Coast of England from the Lake District to Blackpool, a seaside resort town.
$250.00

This is an 1873 Admiralty nautical chart or maritime map of the west coast of England. The map depicts the region from Harrington, near the Lake District, to Blackpool, a seaside resort town. Myriad depth soundings are included all along the coastline and highly detailed illustrations of the Duddon Estuary and Morecambe Bay are present. The Dudden Channel is marked in the Duddon Estuary, along with the Ulverstone Channel, Grange Channel, and Haysham Lake in Morecambe Bay. Coastal towns are labeled throughout the region, including Harrington, Whitehaven, St. Bees, Ravenglass, Barrow, Ulverstone, Lancaster, Fleetwood, and Blackpool. Points, heads, and other coastal landmarks are also labeled, and the lighthouses are indicated by yellow and red circles. Navigational notes are included at certain points between Harrington and Blackpool. Coast railways, including the Whitehaven and Furness Railway, the Furness Railway, the Ulverstone and Lancaster Railway, and the Lancaster and Carlisle Railway are illustrated and labeled as well. Little inland detail is shown, however three charming coastal views and a view of the Monument to Sir. J. Barrow, Secretary to the Admiralty, are situated in the inland portion of the map.

The content for this map was originally surveyed by Captain H. Denham and Commander G. Williams in 1846 and Staff Commander Richards resurveyed Morecambe Bay in 1871. The whole was compiled by the Admiralty and published in 1873.