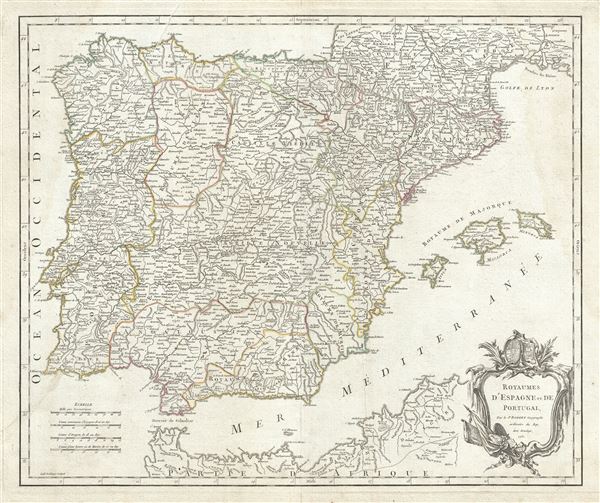 This is a fine 1750 map of Spain and Portugal by Robert de Vaugondy. It covers the Iberian Peninsula including the islands of Majorca, Minorca and Ibiza and depicts the provinces as they appeared when the map was drawn. Various postal routes are noted throughout including towns and cities along the routes. The map renders the entire region in extraordinary detail offering both topographical and political information with mountains beautifully rendered in profile.

The most prominent provinces are New and Old Castile, at the center of the map. A former kingdom, this area eventually merged with its neighbors, and today comprises the autonomous region of Castile y Leon in the northwest, and Castilla-La Mancha and Madrid, in the center and south of the country. Many of the provinces appear in their modern configuration.

This map was originally engraved by Catherine Haussard, one of the few female engravers active in Paris during the 18th century. Her fine work extends to the large and elaborate decorative title cartouche in the bottom right quadrant. The map was drawn by Robert de Vaugondy and published in the 1757 issue of his Atlas Universal. The Atlas Universal was one of the first atlases based upon actual surveys. Therefore, this map is highly accurate (for the period) and has most contemporary town names correct.

Rumsey 3353.108. Pedley, Mary Sponberg Belle et Utile: The Work of the Robert de Vaugondy Family of Mapmakers, 303.
Looking for a high-resolution scan of this?