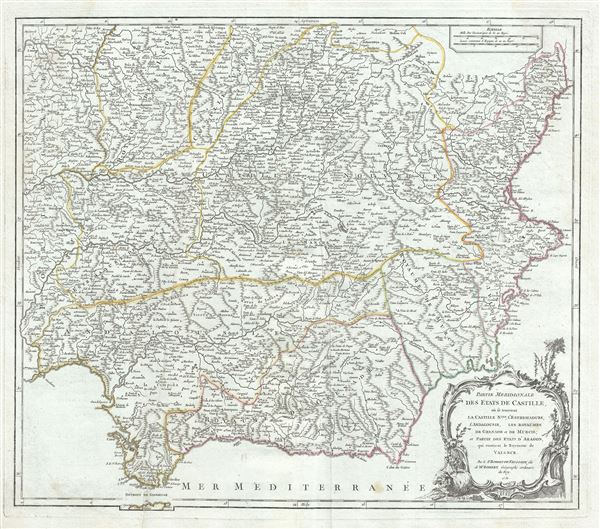 This is a beautiful 1751 map of southern Spain by Robert de Vaugondy. It extends from Ayamonte north to Segovia and from Guarda in Portugal to Balearic Sea. The important cities of Granada, Madrid, Malaga, Seville, Valencia and Gibraltar. The map renders the entire region in extraordinary detail offering both topographical and political information with forest and mountains beautifully rendered in profile. A beautifully engraved title cartouche in included in the bottom right quadrant. The map was drawn by Robert de Vaugondy in 1751 and published in the 1757 issue of his Atlas Universal. The Atlas Universal was one of the first atlases based upon actual surveys. Therefore, this map is highly accurate (for the period) and has most contemporary town names correct.

Very good. Some wear along original centerfold. Minor crease across the map near centerfold. Original platemark visible. Some spotting. Water stain near borders.

Rumsey 3353.074. Pedley, Mary Sponberg Belle et Utile: The Work of the Robert de Vaugondy Family of Mapmakers, 312.
Looking for a high-resolution scan of this?