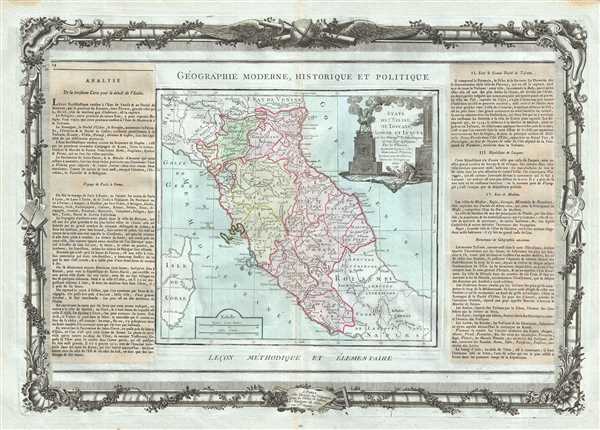 Beautiful early map of Tuscany and the Papal States.
$350.00

This is beautiful example of Desnos and Brion de la Tour’s 1786 map of central Italy. It covers the regions of Tuscany and the Papal States and includes part of the island of Corsica. Extends from Venice south to Naples. The map renders the entire region in extraordinary detail offering both topographical and political information.

> A beautifully engraved title cartouche adorns the top right quadrant of the map. To the left and right of the map are paste downs of French text with remarks and description of the map. Surrounding the whole is an elaborate decorative border featuring floral arrangements, surveying tools, elaborate baroque scalloping, and a winged globe. This map was issued as plate no. 19 in the most deluxe edition of Desnos’ 1786 Atlas General Methodique et Elementaire, Pour l’Etude de la Geographie et de l’Histoire Moderne.


Louis Brion de la Tour (1743 - 1803) was the Cartographer Royal to the King of France, his official title being Ingenieur-Geographe du Roi. Despite a prolific cartographic career and several important atlases to his name, little is actually known of his life and career. He may have been born in Bordeaux. His son of the same name was born in 1763 and published until his death in 1832. It is nearly impossible to distinguish the work of the father from the work of the son, as both used the same imprint and were active in roughly the same period. Much of their work was published in partnership Louis Charles Desnos (fl. 1750 - 1790). Their most notable work is generally regarded to be his 1766 Atlas General. Learn More...