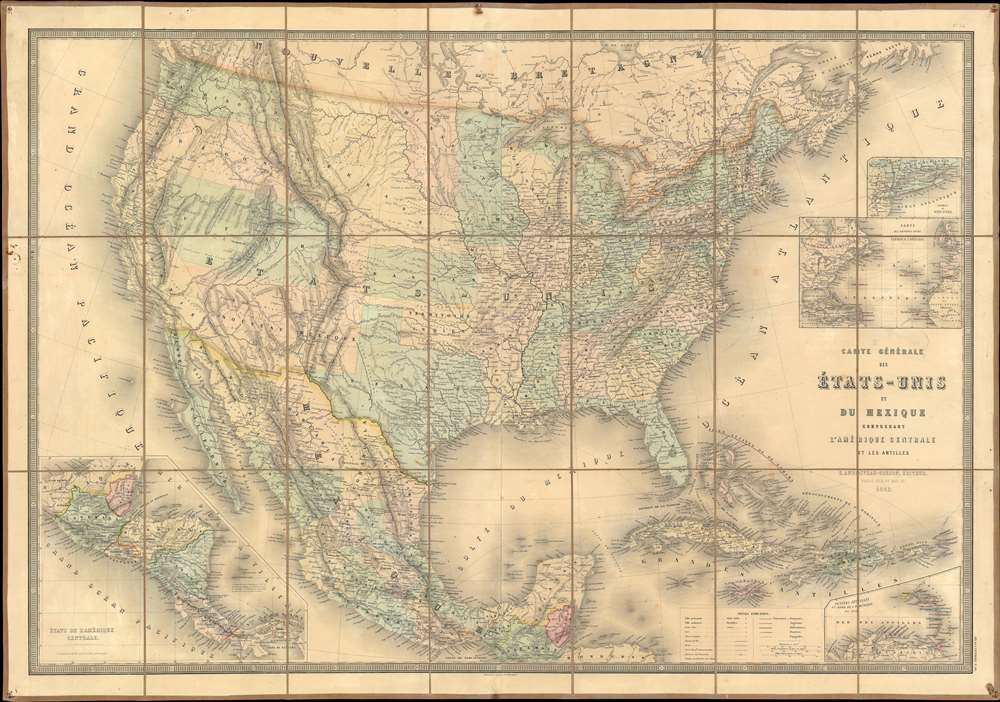 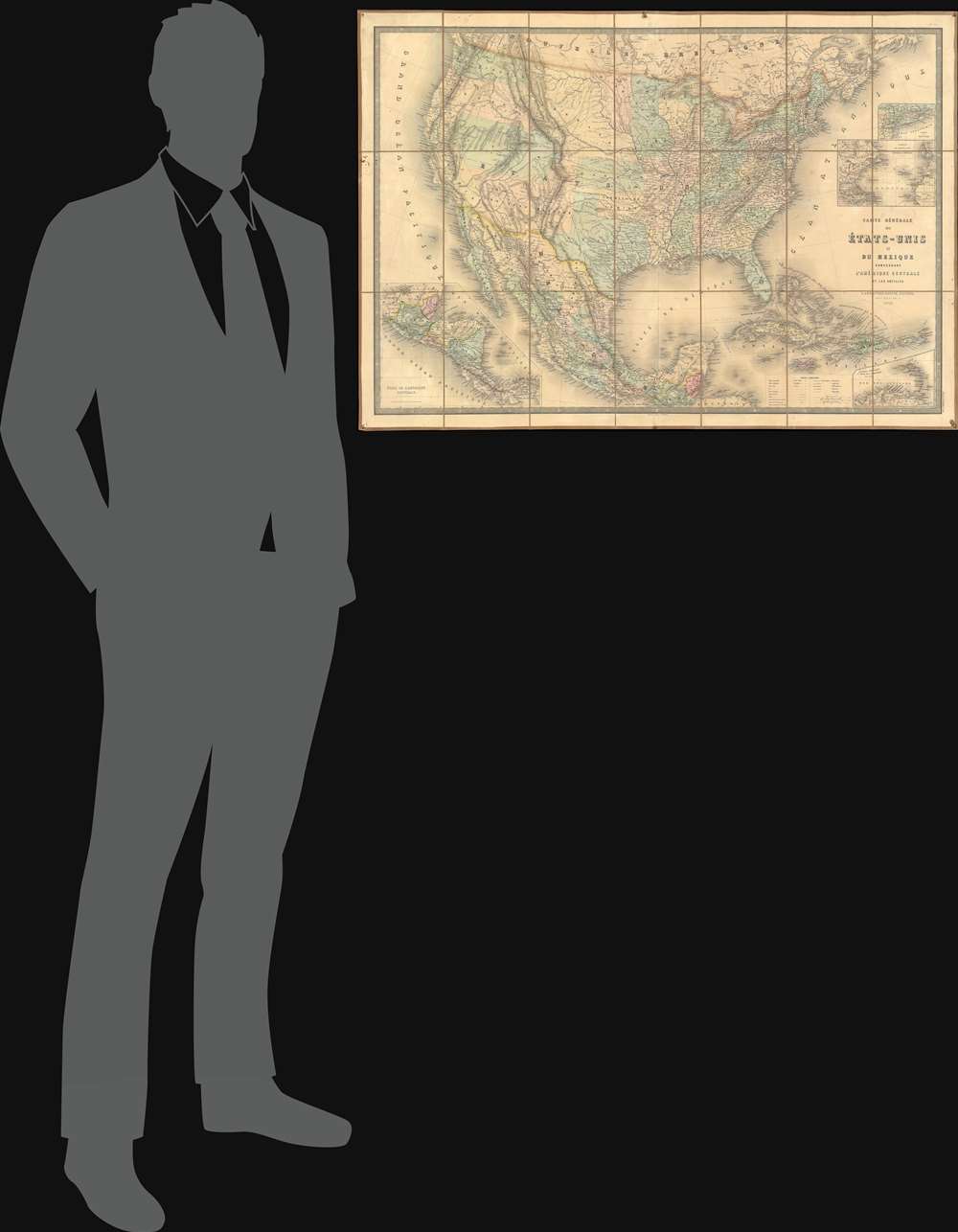 Proposed Territories of Colona and Shoshone.
$1,850.00

This is an 1862 Eugène Andriveau-Goujon and Alexandre Vuillemin map of the United States and Mexico - illustrating the ephemeral proto-territories of Colona and Shoshone. The map depicts from the Pacific to the Atlantic and from southern Canada (Nouvelle Bretagne) to Honduras.

Two early regional names appear: Colona, roughly corresponding to Colorado, and Shoshone, would soon become the Idaho Territory. Colona was a proposed territory roughly corresponding to modern-day Colorado. A proposal for 'Colona', occupying the mountains western parts of what was then Nebraska and Kansas, was put forth in 1859. The hope was for territorial status to enable self-governance, regulation, and administration of what quickly becoming one of America's greatest gold and silver mining centers. Congress, focused on the struggle between slave and free states in the raucous lead-up to the American Civil War (1861 - 1865) found it easier to ignore the petition. Nonetheless, Colorado was recognized as a territory two year later in 1861. The Colona petition was largely forgotten.

Shoshone was a proposed new territory name roughly corresponding to modern-day Idaho. The Shoshone are a group of Native American tribes that live in the northwest United States. 'Shoshone' was used generically to refer to their ranging lands and even proposed as an official territory name. Modern day Dakota and Idaho are believe to be derived from a Shoshone words. Idaho Territory was incorporated in 1863.

During the nearly three year period between Minnesota's statehood on May 11, 1858 and the creation of the Dakota Territory in March 2, 1861, the Pembina Region between the Missouri River and Red River, Minnesota's newly-created western border, was unattached to any territory. Following Minnesota's statehood, a provisional government was set up in the Pembina to lobby for territorial self-governance. The proposal was ignored by the Federal government until the Dakota Territory was formed, which upon its creation included most of present-day Montana, Wyoming, and both North and South Dakota. Curiously, Dagotah is written in the same typeface as that of Shoshone, Colona, Nevada, and Arizona, leading us to believe the cartographers were justifiably confused by the ever-changing boundaries.

Although the Confederate States of America are not illustrated here, Confederate Arizona is, in the lower third of the New Mexico Territory. Confederate Arizona was a territory claimed by the Confederate States of America from 1861 until 1865. The idea for an Arizona Territory appears as early as 1856, when the government of the Territory of New Mexico began to express concerns about being able to effectively govern the southern part of the territory, as it was separated from Santa Fe by the Jornada del Muerto, a particularly unforgiving stretch of desert. The New Mexico territorial legislature acted on these concerns in February 1858, approving a resolution in favor of creating an Arizona Territory, with a north-south border to be defined along the 32nd parallel. Impatiently waiting for Congress to approve the creation of the new territory, 31 delegates met at a convention in Tucson in April 1860 and drafted a constitution for the 'Territory of Arizona', which was to be organized out of the New Mexico Territory below 34th parallel. The convention even elected a territorial governor and a delegate to Congress. Congress, however, was reluctant to act. Anti-slavery Representatives knew that the proposed territory was located below the line of demarcation set forth by the Missouri Compromise for the creation of new slave and free states, and they were not inclined to create yet another slave state. Thus, Congress never ratified the proceedings of the Tucson convention, and the Provisional Territory was never considered a legal entity.

With the inclusion of Confederate Arizona, the question of why the Confederacy was not included arises. There may be two reasons for this reality. First, the exclusion of the Confederacy may be a reflection of French history. Since the French Revolution of 1789, France had been through a revolutionary government (complete with its own calendar), a dictatorship under Napoleon Bonaparte, the restoration of the Bourbon monarchy, the establishment of a liberal constitutional monarchy, another dictatorship, and finally the establishment of the Second Empire in 1852. With all this political upheaval in the space of just over seventy years, Andriveau and Vuillemin may have considered the inclusion of the Confederacy to be superfluous. With their experience of life in France, no matter how the American Civil War ended, the geography of the United States was unlikely to change. On the other hand, it may also illuminate the politics of Andriveau and Vuillemin, in that they overtly chose not to include the Confederacy. This may have been their showing support for the Union.

Roads and railroads wind their way across the country, much more densely in the northern states. Individual states in both the U.S. and Mexico are shaded, and a key is included along the bottom border to explain the map. Four inset maps are included. The top illustrates Long Island and the 'entry into New York', while the one just below that depicts connections between the Old and New Worlds. In the lower-right, there appears an inset of the Lesser Antilles. Central America, from Mexico to Panama, is detailed in an inset in the lower-left.

This map was drawn by Alexandre Vuillemin and published by Eugène Andriveau-Goujon in 1862. We are aware of three examples: University of Virginia, Benedictine College, and University of Texas. It is scarce on the market and has only appeared a handful of times in the last decade.

Very good. Dissected and mounted on linen in 21 panels.