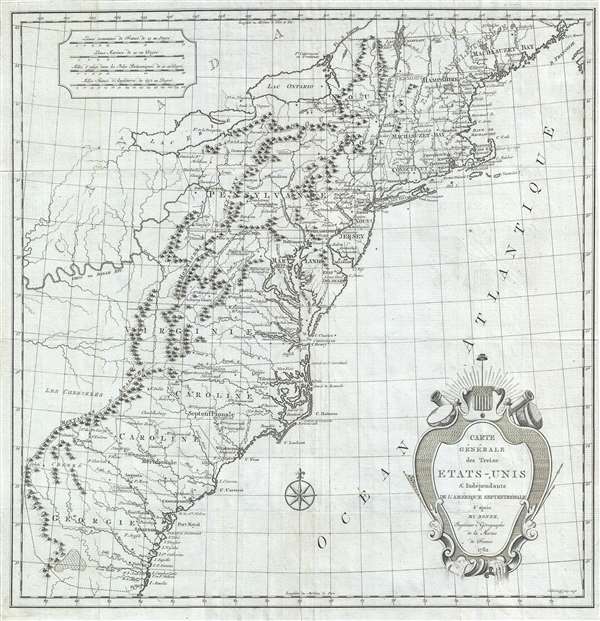 First edition of one of the earliest Revolutionary War Era maps to recognize the fledgling United States.

This is the scarce first edition of Hendrik Klockhoff's 1782 map of United States. Issued at the tail end of the American Revolutionary War (1775 - 1883), this is one of the earliest obtainable maps to name the United States, in this case Etats-Unis. Derived from the work of the French cartographer Rigobert Bonne, the map covers the eastern seaboard of North America from northern Florida in the vicinity of St. Augustine to what is today northern Maine and extends westward past the Appalachian Mountains to include much of the Ohio River Valley. All thirteen of the original English colonies are identified along with their borders as understood by the French.

It is of note that the westward extant of the colonies is strongly delaminated by the Appalachian mountain range, reflecting an interesting French perspective. The French lost most of their American colonies during the French and Indian War. At this time Spain controlled all of Louisiana west of the Mississippi and Great Britain controlled all lands East of the Mississippi – except of the Thirteen Colonies which were then in rebellion. By strictly delimitating the Thirteen Colonies east of the Appalachians, there is some suggestion that France had hopes of reasserting its claims to Louisiana should the Americans win the war.

This map was drawn by Hendrik Klockhoff to illustrate Joseph Mandrillon's Le Spectateur Américain. This work was first published in 1782 and the map offered here appeared in only in this edition. Subsequent editions were issued in 1783, 1784 and 1785, these featured a similar but updated map with five paragraphs of annotative text in the Atlantic. The present example, the first edition of this map, is far rarer and, having been published during the Revolutionary War, more historically significant than the annotated later editions.

Hendrik Klockhoff (fl. c. 1777 - 1798) was an Amsterdam based engraver active in the latter part of the 18th century. Klockhoff engraved for numerous Dutch firms including Covens and Mortier. His corpus of work is immense, but the man himself is elusive and we have been unable to discover anything further of his personal or professional history. Learn More...


Rigobert Bonne (October 6, 1727 - September 2, 1794) was one of the most important French cartographers of the late 18th century. Bonne was born in Ardennes à Raucourt, France. He taught himself mathematics and by eighteen was a working engineer. During the War of the Austrian Succession (1740 - 1748) he served as a military engineer at Berg-op-Zoom. It the subsequent years Bonne became one of the most respected masters of mathematics, physics, and geography in Paris. In 1773, Bonne succeeded Jacques-Nicolas Bellin as Royal Cartographer to France in the office of the Hydrographer at the Depôt de la Marine. Working in his official capacity, Bonne compiled some of the most detailed and accurate maps of the period - most on an equal-area projection known erroneously as the 'Bonne Projection.' Bonne's work represents an important step in the evolution of the cartographic ideology away from the decorative work of the 17th and early 18th century towards a more scientific and practical aesthetic. While mostly focusing on coastal regions, the work of Bonne is highly regarded for its detail, historical importance, and overall aesthetic appeal. Bonne died of edema in 1794, but his son Charles-Marie Rigobert Bonne continued to publish his work well after his death. Learn More...