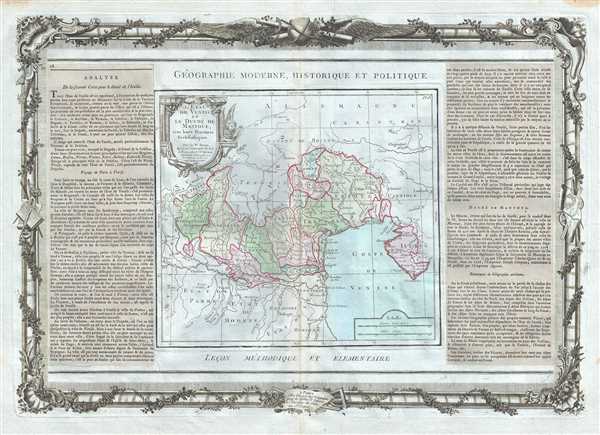 Early map of northeast Italy during the decline of the Republic of Venice.
$350.00

This is an attractive 1786 map of northeast Italy by Desnos and Brion de la Tour. It covers from Cadorin south to Romaine and depicts the regions of Venice and Mantua. The map renders the entire region in extraordinary detail offering both topographical and political information.

The map depicts the Veneto region and its vicinity during the decline of the Republic of Venice. Italy at this time was a diverse assortment of fiefdoms, religious statelets, and republics in the process of sloughing of rigid control of powerful renaissance dynasties. This process would culminate in the French invasion of northern Italy and the creation of the Kingdom of Italy in 1804.

A beautifully engraved title cartouche adorns the top left quadrant of the map. To the left and right of the map are paste downs of French text with remarks and description of the map. Surrounding the whole is an elaborate decorative border featuring floral arrangements, surveying tools, elaborate baroque scalloping, and a winged globe. This map was issued as plate no. 18 in the most deluxe edition of Desnos’ 1786 Atlas General Methodique et Elementaire, Pour l’Etude de la Geographie et de l’Histoire Moderne.