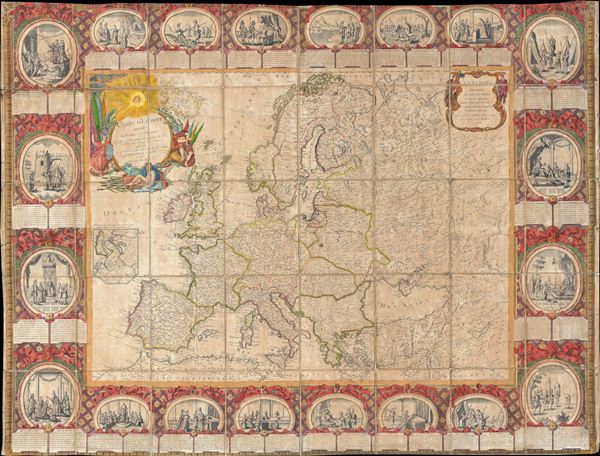 A large and impressively decorative 1776 case map or pocket map of europe by Jean Baptiste Louis Clouet. Clouet's map covers all of europe from Spain to the Ural Mountains and from Nova Zembla and the Arctic Ocean to North Africa, Turkey, and Persia. It includes the Black Sea, and adjacent parts of Asia. The map proper is surrounded by twenty vignettes illustrating important moments in european history as well as various monarchs. Beneath each vignette is a short paragraph of explanatory text in French and Spanish. The map has been dissected and mounted on linen in 32 sections. Clouet most likely intended this map to be part of a five map set illustrating Asia, europe, Africa, the Americas, and the World.

This map was issued on the cusp of world changing events. The American Revolution had just started and by the end of the century would spread its egalitarian ideals to europe - most specifically France. In the meantime Clouet paints a picture of europe dominated by the remnants of feudalism. Kings in France, Spain, england, and Portugal, while central europe remained a loose coalition under the Holy Roman empire. Poland, though in longer period decline under the Commonwealth, still claimed vast expanses of territory from the Baltic to the Black Sea. Russia meanwhile was pushing across the continent as far as China and Siberia. Italy, though here color coded as a single country, was in fact an amalgam of independent princedoms, duchies, and republics. This largely untenable system would soon breakdown into the French Revolution and Napoleonic Wars - the growing pains of a new world order.

Jean Baptiste Louis Clouet (c. 1730 - 1790) was a French cartographer active in the mid to late 18th century. Clouet, who held the post of Royal Geographer of the Academie des Sciences de Rouen, had offices in Paris and Cadiz. Clouet's most important work is his Geographie Moderne, which was published in various editions from 1776 - 1793. Clouet also produced a series of stunning and highly decorative wall maps depicting the various continents.


Louis-Joseph Mondhare (1734 - August 21, 1796) was a French engraver and publisher of maps, prints and vues d'optique active in the second half of the 18th century. Mondhare was born in Bougy (Calvados) and moved to Paris on or before 1759. He began publishing around 1760 under the Chez Mondhare imprint. On June 7 of 1784, his son-in-law Pierre Jean (1754-1829) joined the business and they changed their imprint to Mondhare & Jean. The Mondhare firm maintained their office in Paris on Rue St. Jacques, at the Hôtel Saumar, a well-known location for print sellers near St. Severin. Later they relocated to 32 Rue Saint-Jean de Beauvais. The firm ceased operation around 1796. Mondhare died shortly afterward in 1799. His name variantly appears on some imprints as Mondar or Mondhard.

Average. Upper and lower borders have been trimmed - see image. Even overall toning. Some soiling. Original linen backing exhibits some wear. Price reflects these issues.
Looking for a high-resolution scan of this?