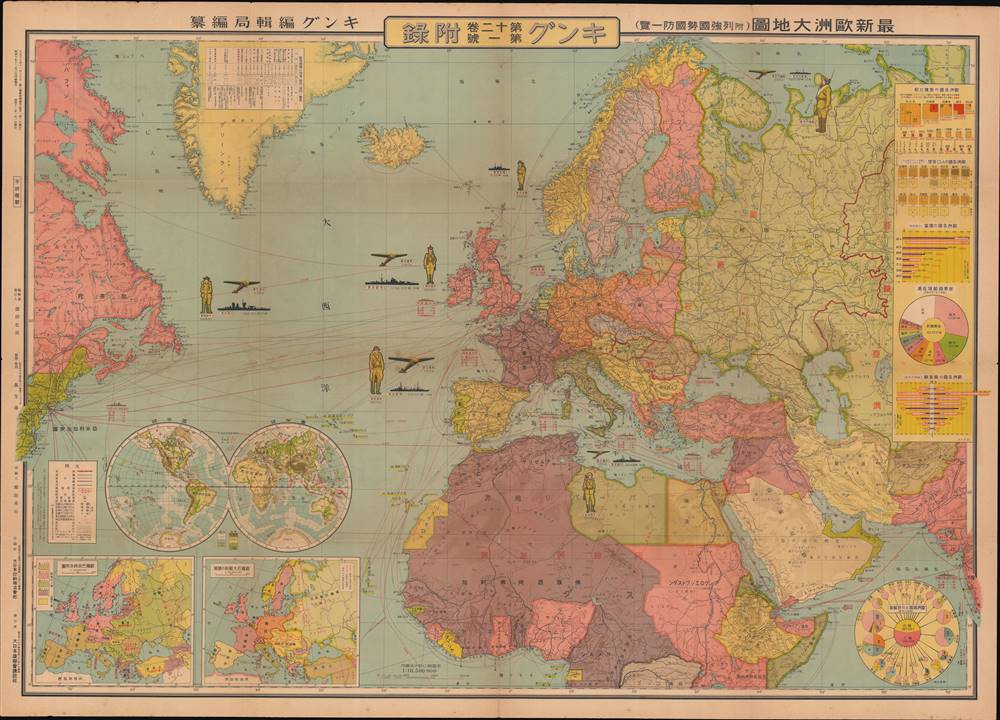 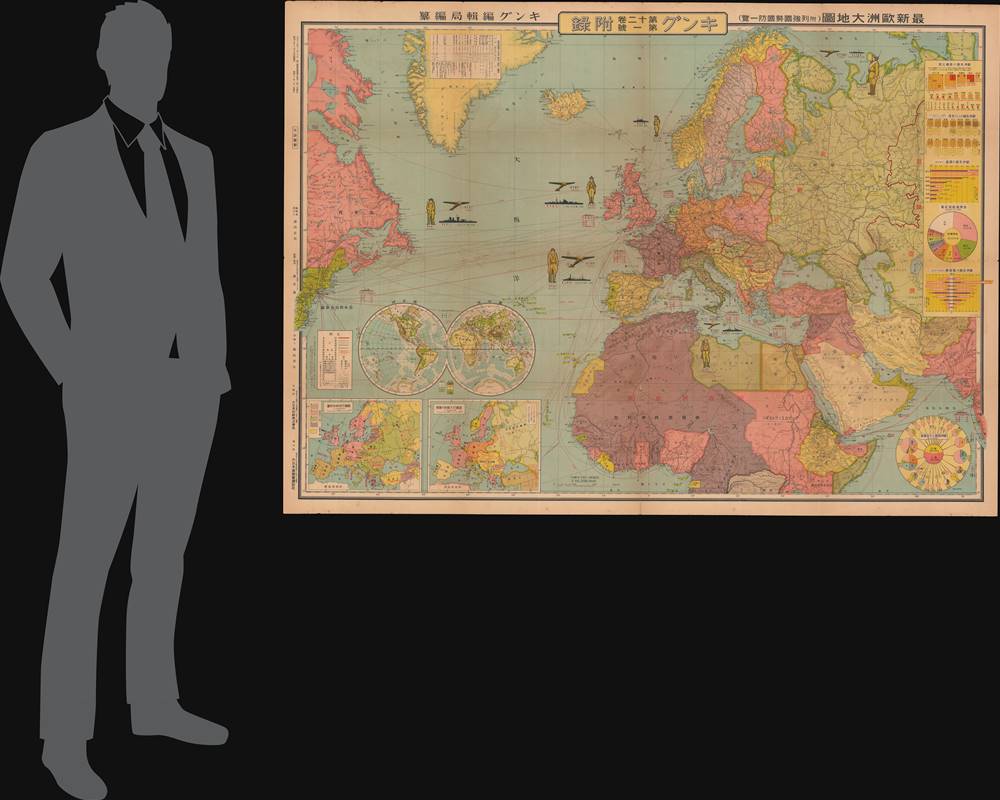 Gathering storm clouds over Europe, as seen from Japan.
$750.00

This is a very rare and unusual Japanese portrayal of European military power by Fuchida Tadayoshi - illustrated to support Japanese interest in the increasingly tense situation in Europe, as well as to emphasize to the Japanese public the value of European alliances. It was published as a supplement to the January 1, 1936 (Showa 11), edition of King (キング) magazine. The map, along with the included insets, charts, and graphs, describes the military and economic situation in Europe at the time and the relationship of Japan to the emerging European conflict.

This map covers the western end of Eurasia, North Africa, the North Atlantic, and the eastern seaboard of Canada and the United States. Soldier figurines, ships, and airplanes represent the ground, sea, and air forces of the United States, Britain, France, Germany (in the North Sea), the Soviet Union, and Italy (in Libya), with the number of troops, ships, and planes written underneath the illustrations. Individual fleets of the various navies are also depicted with a ship outline and red text, noting the types and numbers of ships in each fleet. A note next to legend states that estimations of ground and air forces are based on a 1932 report by the League of Nations, but that military forces of Germany and the Soviet Union had expanded considerably since then.

Two inset maps sit below the legend: the map at right shows Europe's borders before the Great War, while the map at left shows the distribution of ethnicities and 'races' in Europe according to a color-coding system, with Latins as brown, 'Teutons' as red, Slavs as green, Celts as purple, and Asians as yellow. This map reveals the common acceptance of pseudoscientific racial categorizations and scientific racism in Japan at the time.

To the right are a series of charts and diagrams with geographic and economic information, including, from top: a comparison of each country's land area, the total population and population density of each country, the national wealth of each country, each country's share of global shipping, and trade statistics for each country. Japan and, in most cases, the U.S. are also included in these tables, though the focus is on Europe. The circular diagram at bottom-right shows Japan's imports (at top) and exports (at bottom) with major European economies (based on 1934 statistics). Overall, Japan ran a trade deficit with Europe and its largest European trading partner was Britain, with whom it had a considerable trade surplus; Germany was a close second, with Japan importing much more than it exported to Germany.

The Origins of the Second World War

This map was produced at a time when Europe and the world began sliding towards a major conflict, though it did not necessarily appear that way at the time. In retrospect, Japan's invasion of Manchuria in 1931, gradual occupation of northern China in the mid-1930s, and increasing antagonism towards Great Britain and the United States were major antecedents to World War II in Asia. In Europe, in the months just prior to this map's publication, Italy had invaded Ethiopia and established the Rome-Berlin Axis with Nazi Germany (Japan was already negotiating behind closed doors to join the Axis). The major common factor tying the situations in Asia and Europe together was the Soviet Union, which both Japan and Germany viewed as a malign force dedicated to exporting Communism throughout the world. By the end of 1936, Japan and Germany would sign the Anti-Comintern Pact, a predecessor to the Tripartite Pact signed (with Italy also) in September 1940. 1936 also saw the Spanish Civil War break out, which became a proxy war for contending ideologies and powers, especially Germany and the Soviet Union.

Founded by the dynamic Noma Seiji (野間淸治), Kōdansha suffered difficulties during the war period, due to both intense censorship and the death of both Noma Seiji and his son, Noma Hasashi (野間恒), within weeks of each other in 1938. Still, the company survived the wartime era and, after a period of difficulties during the U.S. Occupation due to Kōdansha's earlier endorsement of militarism, benefitted from a postwar publishing revival. Although King and other magazines ceased publication in the postwar period, Kōdansha branched into other areas, including manga and music recording, and is now the largest publisher in Japan.

This map was edited and distributed by Fuchida Tadayoshi (淵田忠良), engraved by Mori Yoshio (森芳雄) and printed by Yokota Shūji (横田秀治), both of Dai Nippon Printing (大日本印刷株式會社), and was published by Dai Nippon Yūbenkai Kōdansha (大日本雄辯會講談社) as a supplement to the January 1, 1936 (Showa 11) edition of King (キング) magazine. The map is held by the National Diet Library and is scarce to the market.


Mori Yoshio (森芳雄; December 21, 1908 - November 10, 1997) was an accomplished Japanese painter and ocassional cartographer who also worked in the film industry during the Pacific War. He primarily painted in the Western style and was selected to study painting in France in his youth after winning several international awards. After the war, he continued to paint and taught at the Musashino Art University in Tokyo. Learn More...