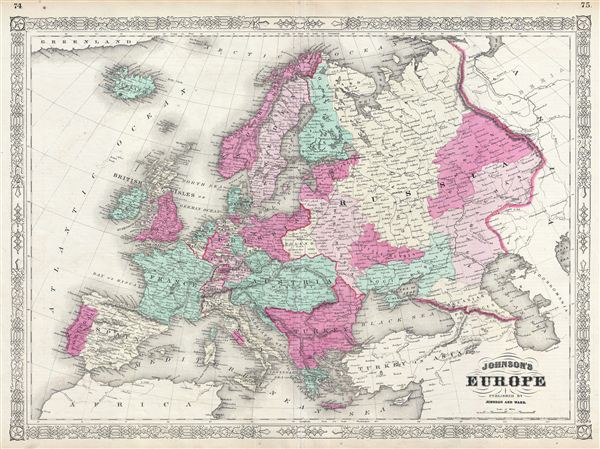 This is a beautiful example of Johnson and Ward's 1864 map of europe. The map covers the continent in its entirety from the Atlantic to the Caspian Sea and from the Arctic Ocean to the Mediterranean Sea. It also details Iceland and parts of Turkey in Asia. This map was created during an exciting historical period that witnessed the unification of Italy and saw the British empire rise to its peak. The Russian states of Little Russia, West Russia, South Russia, Kasan, and Astrachan are also noted. Various towns, cities, rivers and several other topographical features are noted with relief shown by hachure. It features the fretwork style border common to Johnson's atlas work from 1864 to 1869. Published by A. J. Johnson and Ward as plate nos. 74 and 75 in the 1865 edition of Johnson's New Illustrated Family Atlas. This is the first edition of the Johnson Atlas to be attributed to Johnson exclusively.