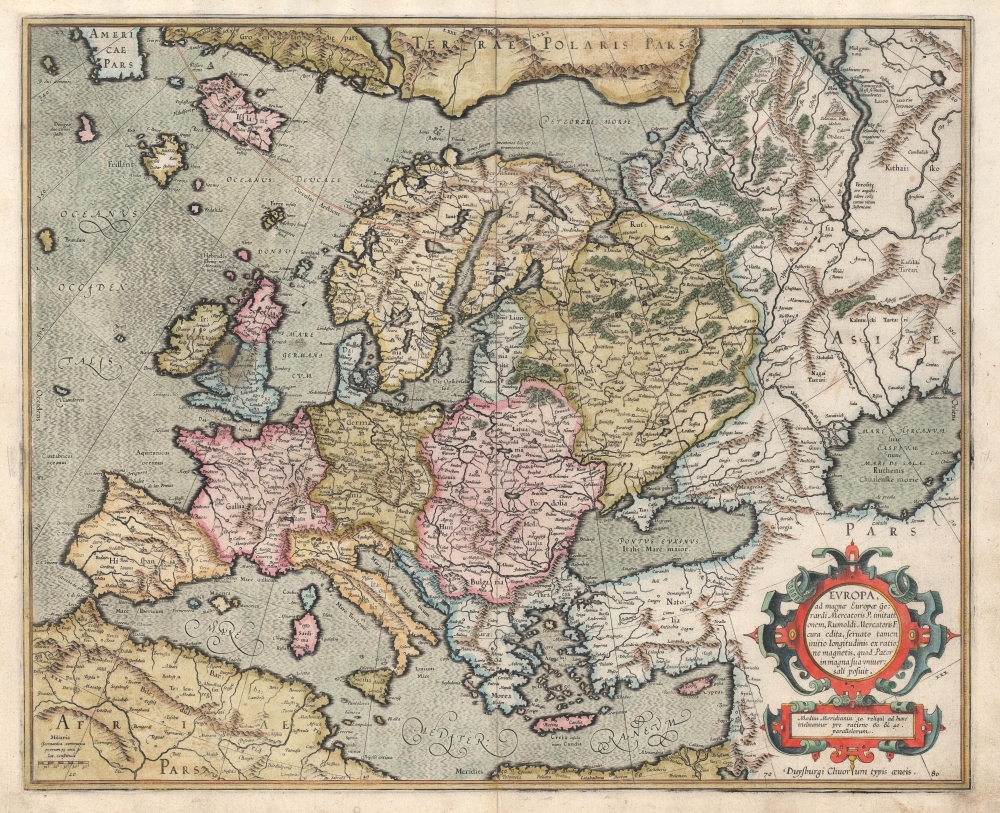 This is the 1595 first atlas edition of Gerard Mercator's map of Europe. It also Mercator's mapping of Muscovy, Tartary, and the distant north of Europe. The map reaches east beyond the River Ob and the Caspian Sea; it encompasses the Mediterranean Sea and reaches north to Mercator's theorized Arctic islands.

Although Mercator produced a 1554 wall map of Europe, this work is derived from his revolutionary 1569 world map. This is evidenced by the inclusion of geographical information derived from the Venetian Nicoló Zeno's 1558 Carta Da Navegar De Nicolo et Antonio Zeni Furono In Tramontana Lano MCCCLXXX, which Mercator and his contemporaries embraced as the best informed map of the northern Atlantic, but which had not come to light when Mercator produced his 1554 map.

Here, the Zeno cartography is shown with superb clarity. The Venetian's depiction of Greenland, complete with its imaginary volcano and Monastery of St. Thomas, informed all Mercator maps of the region. Likewise, the imaginary islands of Frisland, Icaria, and Drogeo are drawn from the Zeno map. Mercator and his contemporaries were unable to investigate the truth of Zeno's allegations, due to the sheer remoteness of those territories. Even when explorers did venture forth, they did not always see true: Martin Frobisher, upon sighting the southern coast of Greenland in 1576, believed that he had seen Frisland and loyally claimed it for England.

Long after geographers had resigned themselves to the nonexistence of these phantom islands, some of the most lionized scholars of the nineteenth century still wrestled over the truth behind the Zeno map, until systematic research revealed in 1898 that the map and indeed the whole Zeno narrative was a pastiche of material already in print, and a deliberate fraud. Mercator's map was not the first to copy these mysterious islands, and they continued to confound geographers most of the seventeenth century.

The map is filled with descriptive notes, particularly in the parts dependent on narrative rather than cartographic sources. Some simply propose new names in place of antiquated toponymy, while others are more illuminating. On the west bank of the River Ob is the Zolotaya Baba (the Golden Woman) an idol reputedly worshipped by the Samoyed indigenes. In general, however, the further east, the more Mercator relied on ancient and legendary sources. Across the Ob from the Zolotaya Baba is a text describing the Samoyed as cannibals. South of them, Mercator describes a people with mouths so small that they sustain themselves with the mere smell of cooked meat.

The map's meticulous lettering and engraving - particularly in the ocean areas and mountains - is typical of Mercator, and is particularly apparent here given the youth of the copperplate and the sharpness of the strike. The map is embellished with an elegant strapwork cartouche.

This map was engraved by Mercator, and first appeared posthumously in the 1595 first edition of Mercator's Atlas sive cosmographicae…. Examples of the map remained in the atlas until 1634, until it was replaced by the Hondius map. This 1595 first issue is rare. In other editions the map is well represented in institutional collections.


Nicolò Zeno the Younger (1515–1565) was a Venetian Senator and author. He was the son of a literary man and a family powerful in Venetian politics, and was reputedly educated in science and the humanities. He was a successful hydraulic engineer, a most important field in so inundated a city as Venice. Able though he may have been, his early entrance to politics at the age of 23 was made possible via payments of 100 ducats to the Council of Ten. Following Venice's disastrous 1537-1540 war with the Ottoman Empire, Zeno wrote and published an unpublished history of the conflict notable for its invective against proponents of the war.

Zeno is mainly remembered for his 1558 publication of a map and series of letters which he claimed to have discovered in a storeroom of the family's home in Venice, purporting to describe a fourteenth century voyage by his ancestors, Nicolò and Antonio Zeno, to the north Atlantic and even to North America. Zeno's position as Senator would have discouraged question of his honesty in Venice, certainly, and the inclusion of his map in Ruscelli's successful 1561 edition of Ptolemy ensured the spread of his geographical ideas. And indeed, Zeno's map was widely accepted for over a century, influencing the maps of Ortelius, Mercator, Blaeu and others, until research (in particular that of Frederic W. Lucas, in 1898) identified both the cartographic and textual sources Zeno employed in concocting his report, demolishing its credibility. Learn More...


Frederic W. Lucas (July 20, 1842 - May 13,1932) was a British solicitor and author. Born in Surrey, he was schooled at Brighton College, went to Cambridge, and became a solicitor in London where he worked in a family firm. Lucas was by discipline a historian of early exploration and an Americanist. While it is not known how disciplined a collector of maps he may have been - by family accounts he collected everything - his approach to the comparative study of maps appears to have been unmatched, and greatly aided by recent developments in the photography and printing, allowing him access to works of the greatest rarity that would previously have required years of travel to scrutinize. He published three books pertinent to the study of early maps, particularly of the Americas. The first represented a study of a 1763 map of North America etched on a powder horn. It is his 1898 book, however, which should excite the interest of every map enthusiast: The Annals of the Voyages of the Brothers Nicolo and Antonio Zeno in the North Atlantic about the end of the Fourteenth Century and the Claim founded thereon to a Venetian Discovery of America: A Criticism and an Indictment. The book represents the systematic and gleeful destruction of centuries’ worth of arguments on behalf of the 1558 map and book of Venetian politician Nicolo Zeno the Younger, revealing the account to not be in error but to be a deliberate fraud. With particular care Lucas dismantled the arguments of Richard Henry Major (October 3, 1818 – June 25, 1891) curated the map collection of the British Museum from 1844 until his retirement in 1880 and whose book on the subject of the Zeno Brothers proposed not only that their voyages were genuine, but that they actually supported the idea that America was in visited by Henry Sinclair, Earl of Orkney. Lucas’ book carefully compared the information presented on the Zeno map and found it to have been a pastiche of published maps and travelogues accessible to the 16th century Zeno. Unfortunately for posterity, Lucas’ book (the work after all of an enthusiast) fell out of print, while that of Major (curator of an illustrious museum and member of the Hakluyt Society) remained in continuous publication by that society, to the detriment of a century’s scholarship and permitting the spurious Sinclair narrative to fuel tinfoil hat conspiracy theories regarding the pre-Columbian establishment of Knights Templars in North America.

His third book, The new laws of the Indies for the good treatment and preservation of the Indians, promulgated by the emperor Charles the Fifth, 1542-1543 consisting of a facsimile reprint of the original Spanish laws on the treatment of Native Americans, together with a literal translation into English. Learn More...

Very good. Staining in region of British Isles. Else excellent with a bold strike.