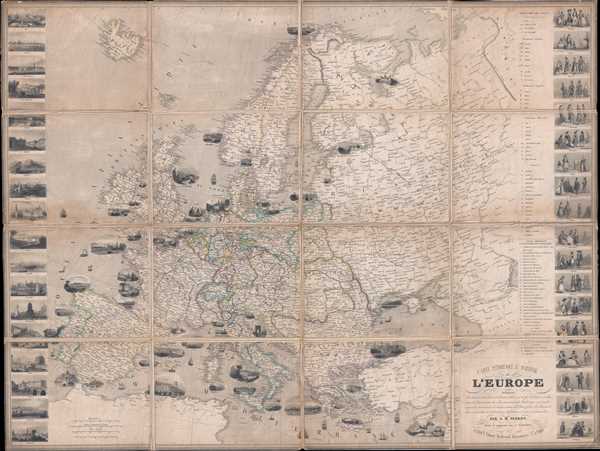 Promotes the misguided belief that Algeria was a part of France.

This is an 1851 Alexandre Vuillemin and Aristide Michel Perrot folding map of Europe. The map depicts the region from the Atlantic Ocean to the Ural Mountains and from the Arctic Ocean to the Mediterranean Sea and North Africa. Each of the countries is labeled, along with each capital city. Numerous other cities and towns are depicted and labeled, along with roads, railways, lakes, and rivers. Vignettes of several European cities dot the map, with scenes from Plymouth, Cherbourg, Bordeaux, Barcelona, Venice, Constantinople, and Hamburg among them. Various symbols are used throughout the map to depict different resources of the animal, vegetable, and mineral varieties, with a key for reading the symbols situated along the right. Along both the right and left borders, vignettes from numerous European countries are illustrated. On the right, caricatures of the typical inhabitants of different European countries are situated, including French, English, German, and Swedish people. On the left, views of European capital cities are included, such as Paris, London, Vienna, Berlin, Madrid, and Naples.

Why is Algeria on a map of Europe?

The inclusion of Algeria would appear to be a curiosity, even a mistake, since no other North African nation appears on the map, and this is stated to be a map of Europe. However, as this is a French map, its inclusion makes sense. In 1848, the coastal portion of Algeria was declared a department of France, making it administratively an integral part of France itself. This is unlike any other colony in the French overseas empire. France came to view Algeria as an inseparable part of metropolitan France, not was a colony. By including Algeria on this map, the Vuillemin is promoting the declaration that Algeria was not foreign soil but a part of France.

This map was originally drawn by Aristide Michel Perrot and 'reviewed an enhanced' by Alexandre Vuillemin in 1851.