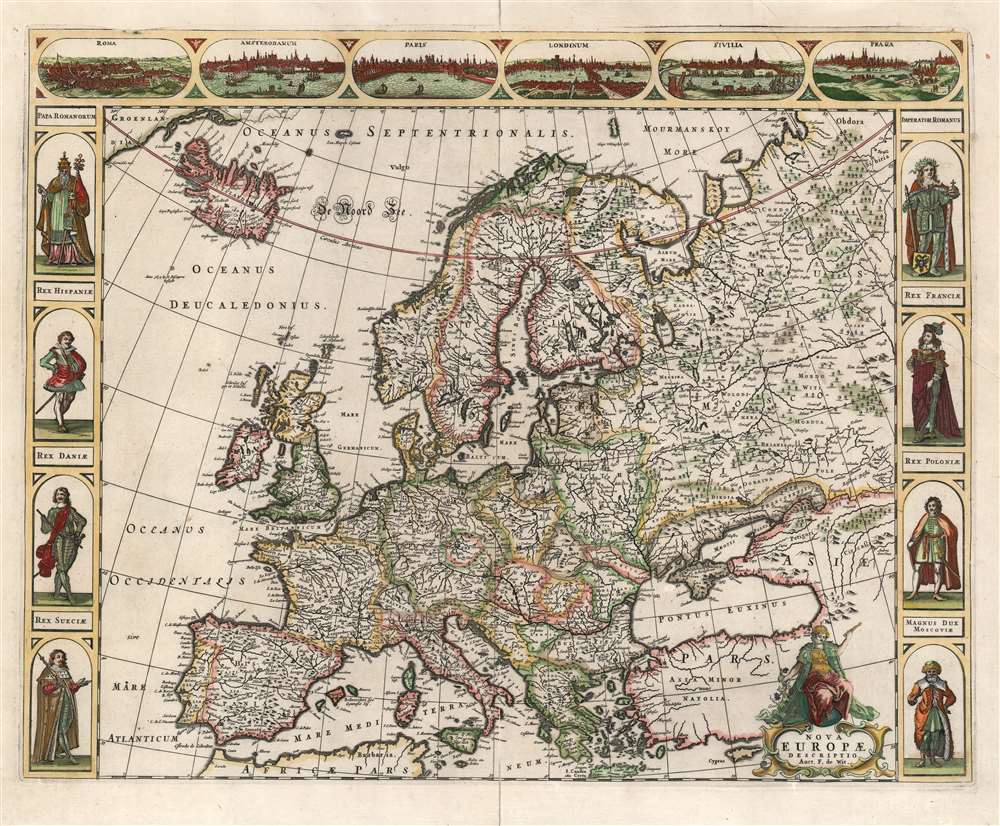 This is a scarce 1660 Dutch carte á figures map of Europe, engraved by Frederick de Wit. This beautifully engraved work was one of a handful of maps that De Wit would have considered his showcase works as he struck out on his own as a mapmaker, after having worked for many years with the Blaeu family. Although in general terms the style of the map is reminiscent of his former teachers', it differs both from the corresponding map in Blaeu's atlases and those of Blaeu's primary competitors, Hondius and Jansson.

The map extends further into Russia than Blaeu's; it shows Isaac Massa's cartography of the Siberian coast as far as the Pechora Sea; the Volga is traced as far as Kazan. De Wit's map improves on the Ukraine and the Circassian regions as well. The focus of the map, overall, is shifted somewhat northwards and to the west as compared to the maps of Blaeu and Hondius; this both allows the inclusion of the newer Siberian detail, and also avoids the repetition of North African detail already covered on the Africa map of the series.

There is a fascinating notation in the North Atlantic - absent from other atlas maps of the period. A small, unnamed island about three degrees south of Iceland is shown, marked with the note 'Anno 1613 by de Biscayers beseylt.' This is a reference to Basque fishermen, and their astonishing reach - it is known now that they sailed as far as the Canadian Maritime Islands and Icelandic waters.

The maps of Blaeu and Speed are generally best known for their decorative borders in this style, but other Dutch mapmakers - Hondius, Jansson, and van der Keere also produced such maps. Generally, this grand treatment was reserved for maps of the continents - these large-scale, general maps were showcases for the mapmaker's art. More often than not, such maps were separate issues or intended for larger, deluxe editions of their respective atlases: for Hondius' atlas, for instance, the borders tended to be absent in the continent maps to permit the use of smaller folio sheets, and waste less margin space throughout the rest of the book.

Similarly, de Wit's four continental maps of 1660 were separate productions, not intended for inclusion in a specific atlas (when he did produce an atlas, he included newly engraved and quite different continental maps.) It is worth noting that neither the city views along the top border, nor the figures in the left and right margins, are copies of earlier works, but appear to be unique to this map. The city views - Rome, Amsterdam, Paris, London, Seville and Prague - are panoramas, rather than the Braun and Hogenberg influenced insets on the Blaeu. The figures, rather than the 'ordinary' characters indicated on other cartes á figures, instead represent rulers: the Pope, the Holy Roman Emperor, the Grand Duke of Muscovy, and the Kings of Spain, Denmark, Sweden, France and Poland. The absence of a King of England is probably not a deliberate snub, but likely a general confusion: the restoration of Charles II would not occur until 1660 when this map was published, and the leadership of the kingdom might not have been readily apparent at the time.

This map was printed in 1660 along with similarly - styled cartes á figures of the other continents, and a map of the world. These were separately issued - de Wit had not yet produced an atlas of his own - and consequently quite scarce. They do appear to have been included occasionally in composite atlases, and in Doncker's maritime atlas. The America and Africa maps are known in several states; however, only a single state of the Europe map has been catalogued. There are three separate examples in OCLC, at the Biblioteca Nacional de Espana, Bibliotheek Universiteit van Amsterdam, and the Universitatsbibliothek Tuebingen.