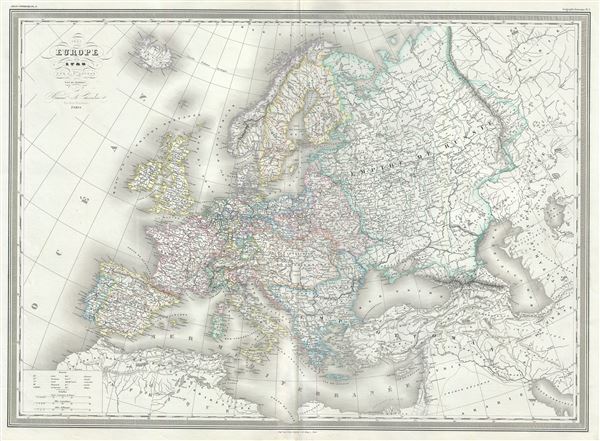 This is a beautiful 1861 elephant folio map of the Europe in 1789 by A. H. Dufour. It covers all of Europe on the eve of the 1789 French Revolution. Throughout, the map identifies various cities, towns, rivers and assortment of additional topographical details.

At the opening of the 18th century France was one of the dominant powers in Europe. With a population of nearly 19,000,000 under a single government and ample arable farmland, France dominated most of Europe socially and economically. In 1785, France faced economic difficulties and ultimately the growing discontent and the ideas of 'equality' and 'freedom of the individual' among the populous would lead to the French Revolution. The 1789 French Revolution resulted in the abolition of the French monarchy and its replacement with a radical democratic republic. In 1799, Napoleon Bonaparte staged a coup which led to Bonaparte's dictatorship and eventually (in 1804) his proclamation as Emperor, which marked the end of the republican phase of the French Revolution. The 1812 French invasion of Russia marked a turning point in Napoleon's fortunes and led to the defeat of his forces at the 'Battle of the Nations' in 1813. In 1814, a coalition of European powers defeated France and forced Napoleon into exile on the island of Elba.