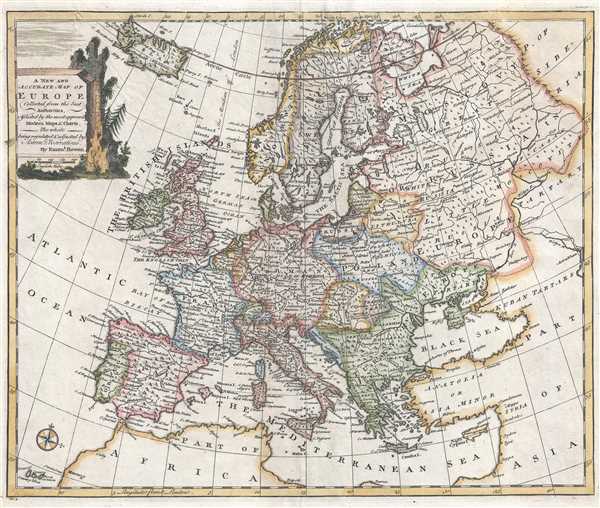 Identifies all the major capitals of Europe, including Paris, Rome, London, Madrid, and Berlin.

This is a beautiful 1747 decorative map of Europe by the English cartographer Emmanuel Bowen. The map depicts the continent from Iceland to Tartary (Central Asia) and from the Arctic Ocean to North Africa. The entire region is illustrated in extraordinary detail, as different countries are labeled and shaded different colors to allow for easy differentiation. Myriad cities and towns are labeled throughout, including Paris, Rome, London, Madrid, Lisbon, Berlin, Prague, Warsaw, Moscow, St. Petersburg, and Athens. Forests and mountains beautifully rendered in profile and numerous rivers are illustrated and labeled. A beautifully engraved title cartouche adorns the top left corner.

This map was created by Emanuel Bowen as plate no. 5 for the 1747 issue of A Complete System of Geography.