1852 Dufour Map of Europe under Charlemagne 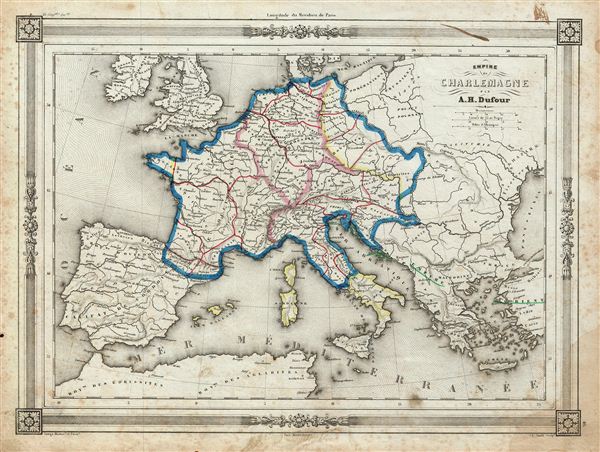 1852 Dufour Map of Europe under Charlemagne

An uncommon and extremely attractive 1852 map of the empire of Charlemagne. The map covers Charlemagne's empire from modern day Germany to Italy. It also includes parts of the United Kingdom, Ireland, Greece, Spain and Portugal. Throughout, the map identifies various cities, towns, rivers and assortment of additional topographical details. After ruling and reforming France in 768, Charlemagne conquered Italy and, in 800, was crowned Holy Roman emperor. For the next 14 years until his death, Charlemagne's empire united much of Western and Central europe for the first time since the collapse of the Roman empire. The ‘Carolingian Renaissance' witnessed a Catholic themed revival of art, religion, and culture, encouraging the formation of a common european identity. The map features a beautiful frame style border. Prepared by A. H. Dufour for publication as plate no. 46 in Maison Basset's 1852 edition of Atlas Illustre Destine a l'enseignement de la Geographie elementaire.