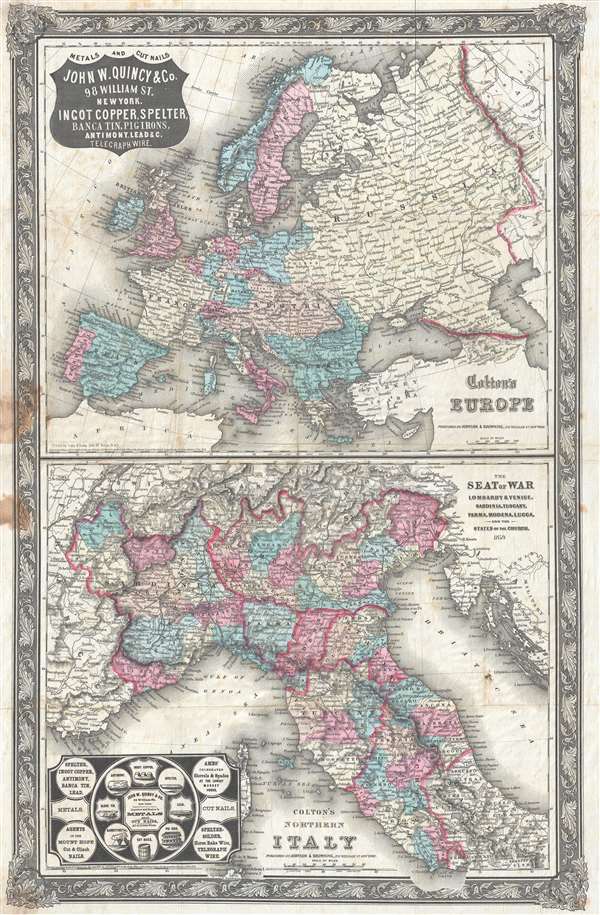 Rare advertising broadsheet issued to capitalize on interest in the Second Italian War of Independence.
$450.00

This is a rare separately issued 1859 appropriation of Colton's c. 1855 maps of Italy and Europe to promote the interests of the John W. Quincy hardware and ironworks company. This map was issued in 1859 to capitalize on general interest in the Second Italian War of Independence (1859 – 1961). The deceased map collector and historian Warren Heckrotte, wrote an article about this map (and others) for the Spring 1993 issue of The Map Collector. In it he discussed the early use of maps for sale and promotion and emphasizes the scarcity and rarity of these short run separately issued rarities.

The copyright on this map references Colton, but the imprint, under the title, refers to Johnson and Browning, who took control of Colton's atlas plates in 1859. The present separate issue edition, was printed by Lang and Laing, lithographers based at 117 Fulton Street, New York City. The Heckrotte copy, a copy in the College of Charleston, and the present offering, are the only known surviving examles we have been able to identify.


Alvin Jewett Johnson (September 23, 1827 - April 22, 1884) was a prolific American map publisher active from 1856 to the mid-1880s. Johnson was born into a poor family in Wallingford, Vermont where he received only a based public education. He is known to have worked as school teacher for several years before moving to Richmond, Virginia. Johnson got his first taste of the map business and a salesman and book canvasser for J. H. Colton and company. The earliest Johnson maps were published with D. Griffing Johnson (no clear relation) and date to the mid-1850s, however it was not until 1860 that the Johnson firm published its first significant work, the Johnson's New Illustrated (Steel Plate) Family Atlas. The publication of the Family Atlas followed a somewhat mysterious 1859 deal with the well-established but financially strapped J. H. Colton cartographic publishing firm. Although map historian Water Ristow speculates that Colton sold his copyrights to Johnson and his business partner, another Vermonter named Ross C. Browning (1832 - 1899), a more likely theory is that Johnson and Browning financially supported the Colton firm in exchange for the right to use Colton's existing copyrighted map plates. Regardless of which scenario actually occurred it is indisputable that the first Johnson atlas maps were mostly reissues of earlier Colton maps. Early on Johnson described his firm as the "Successors to J. H. Colton and Company". Johnson's business strategy involved transferring the original Colton steel plate engravings to cheaper lithographic stones, allowing his firm to produce more maps at a lower price point. In 1861, following the outbreak of the American Civil War the Johnson and Browning firm moved their office from Richmond, Virginia to New York City. Johnson and Browning published two editions of the Johnson Atlas in 1860 and 1861. Sometime in 1861 Browning's portion of the firm was purchased by Benjamin P. Ward, whose name subsequently replaced Browning's on the imprint. The 1863 issue of the Family Atlas was one of the most unusual, it being a compilation of older Johnson and Browning maps, updated 1862 Johnson and Ward map issues, and newer 1863 maps with a revised border design. The 1864 issue of the Family Atlas is the first true Johnson and Ward atlas. Johnson published one more edition of the atlas in partnership with Ward in 1865, after which Johnson seems to have bought out Ward's share the firm. The next issue of the Atlas, 1866, is the first purely "Johnson" atlas with all new map plates, updated imprints, and copyrights. The Family Atlas went through roughly 27 years of publication, from 1860 to 1887, outliving Johnson himself who died in 1884. Johnson maps from the Family Atlas are notable for their unique borders, of which there are four different designs, the "strapwork border" from 1860 to 1863, the "fretwork border" from 1863 to 1869 and the "spirograph border" in 1870 – 1882, and a more elaborate version of the same from 1880-1887. In addition to the Family Atlas Johnson issued numerous wall maps, pocket maps, and in the 1880s the Cyclopedia. Johnson maps are known for their size, accuracy, detail, and stunning, vivid hand coloring. Johnson maps, purely American in their style and execution, chronicle some of the most important and periods in American history including the Civil War, the Westward Expansion, and the Indian Wars. Today Johnson's maps, especially those of the American west, are highly sought after by map collectors and historians.


Lang and Laing (fl. 1861 – August 16, 1862) were New York City based publishers and lithographers active in the middle part of the 19th century. The firm was founded by founded by William Lang and Joseph Laing and maintained offices at 117 Fulton Street, New York City. They specialized in transferring copper and steel plates to lithographic stone for more economical printing. Their most significant cartographic work is the Jacob de Cordova and Robert Creuzbaur map of Texas. The firm was dissolved in August of 1862. Lang went on to partered with Henry Pooley Cooper, and continued to publish under the Lang and Cooper imprint until 1864.

Very good. Some discoloration where originally attached to binder, which is not present.