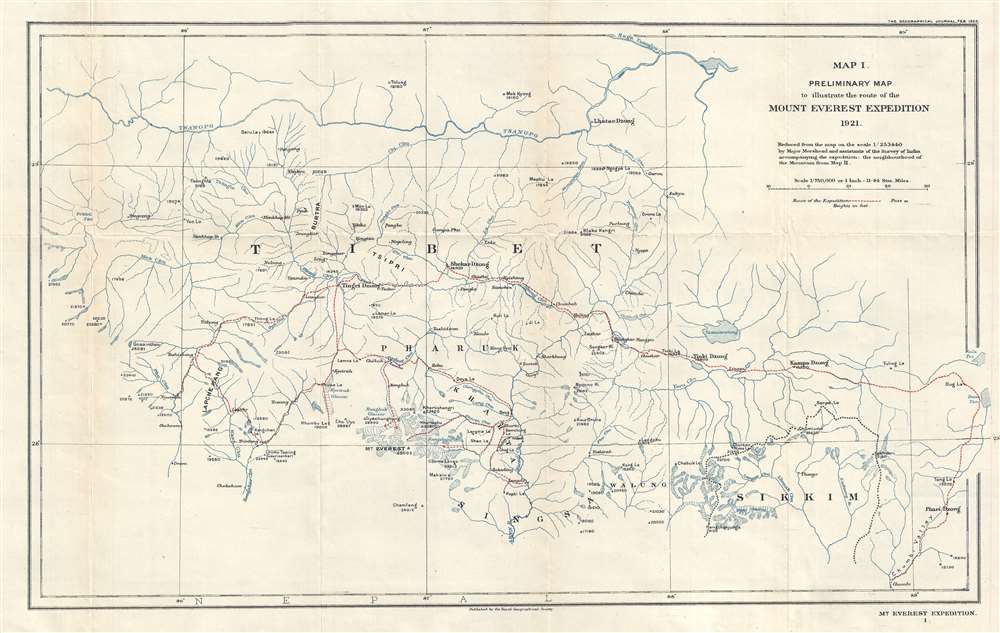 This is a 1922 Henry Triese Morshead and Royal Geographical Society map of Tibet and the route followed by the first western expedition to Mount Everest in 1921. Mapping previously uncharted territory, the map depicts the region from Pekhü Tso to Kala Tso and Bam Tso and from the Tsangpo River to Chumbi. Myriad rivers, glaciers, settlements, and passes are labeled. With the goal of discovering a route that would lead to the summit, the expedition team made a thorough reconnaissance of the area. This map is a reduction of a map produced by Morshead and his team that charted over 12,000 square miles of previously unknown terrain, possibly making it the first obtainable map of the Everest region.

The British Mount Everest Expedition of 1921

Due to Mount Everest's location on the border between Tibet and Nepal, the highest mountain on earth had previously been off-limits to western explorers because both Tibet and Nepal forbade entry to foreigners. However, due to the development of a friendship between the Dalai Lama and a British official in India, the 1921 expedition was allowed to enter Tibet. The expedition was even shown great hospitality by local district governors because of a proclamation by the Dalai Lama himself. Once the party reached the vicinity of Everest, the Rongbuk Glacier, West Rongbuk Glacier, and the North Col were explored. Two maps were produced during this expedition: Morshead's map of the region and a photographic survey conducted by Sir Edward Oliver Wheeler (April 18, 1890 - March 19, 1962), which provided the first detailed depiction of the immediate vicinity around Mt. Everest. It was decided that the best route for an ascent would be the Rongbuk - East Rongbuk - North Col route, though the 1921 team was unprepared to make a summit attempt. Even before the 1921 expedition had made it out of Tibet, the decision had already been made to send an expedition in 1922 to try for a summit attempt. A member of the 1921 expedition, George Mallory, would also be a part of the team that went to Everest in 1922 and again 1924. It is believed that Mallory was the first man to summit Everest, although, since he died on the mountain and was never able to confirm his success, Mallory's successful summit attempt is still questioned.

This map was reduced from a larger map created by Major Henry Triese Morshead of the Survey of India for publication in the February 1922 edition of The Geographical Journal. We have located examples in two institutional collections at the British Library in London and at the Bibliothèque National de France in Paris and this map is scarce on the market.

Henry Triese Morshead (November 23, 1882 - May 17, 1931) was an English surveyor, mountaineer, and explorer. Born near the Devon-Cornwall border, Morshead attended Winchester College before entering the Royal Military Academy, Woolwich (for which he had to sit the entrance exams twice). Upon graduation in 1901 he was commissioned as an officer in the Royal Engineers and then attended the Royal School of Military Engineering. After finishing a very successful course of study, Morshead was posted to the British Indian Army in Agra as part of the Royal Engineers' Military Works Services. By 1906 he had joined the Survey of India, where he eventually ran the Forest Map Office, then the Computing Office, and finally the Triangulation Surveying Party. He would remain with the Survey of India until his death, exempting his service in World War I. In 1913, Morshead accompanied Frederick Bailey as a surveyor on an expedition to explore the Yarlung Tsangpo Grand Canyon (Tsangpo Gorge), known today as the world's deepest gorge. This expedition covered 1,680 miles and lasted from May until November 1913. At the outbreak of World War I, Morshead was immediately sent to England to train sappers. By 1915 he was in command of the 212th Field Company, Royal Engineers 33rd Division at the Battle of Hohenzollern Redoubt. He also commanded troops at the Battle of the Somme, the Battle of Arras, and the Battle of Passchendaele. He was evacuated to England after the Battle of Passchendaele due to trench fever and returned to France in 1918 to command the 46th (North Midland) Divisional Engineers. He was wounded by shrapnel while reconnoitering the St. Quentin Canal and was evacuated a second time. He did not make it back to France before the end of the war. After the war, Morshead returned to the Survey of India and led survey work in Waziristan. He accompanied Alexander Kellas in an attempt to clime the 25,447 foot Kamet in 1920, but was unable to reach the summit after the porters refused to establish a camp at 23,500 feet. Morshead led the Survey of India team on the 1921 British Mount Everest reconnaissance expedition, during which his team mapped 12,000 square miles of entirely unexplored territory. He climbed Kama Changri at 21,300 feet and, with George Mallory, was the first to establish the camp on Lhakpa La (22,350 feet). Morshead was also a member of the 1922 Everest expedition, this time as a member of the climbing party. As a member of the first assault team, along with Mallory, Howard Somervell, and Teddy Norton, Morshead and the others attempted to reach Everest's summit without oxygen. Morshead reached Camp V at 25,000 feet, but, after climbing down 100 feet to recover a dropped rucksack, was physically unable to continue. The rest of the party reached 26,985 feet (short of the summit) before being forced to turn back. By then Morshead was in really poor shape. On the descent Morshead slipped and nearly caused the entire party to perish before Mallory managed to stop the fall. Deemed 'not far from death' by Somervell, Morshead somehow managed to get himself down off the mountain. It was discovered later the Morshead had suffered severe frostbite to his hand and a foot, eventually losing three finger joints, but he hid these injuries from his colleagues during the descent. Morshead was deemed unable to participate in the 1924 Everest expedition due to his injuries and was unable to accept the role as base camp and transport officer because his employers would not give their permission, even for unpaid leave. He was awarded a special medal for mountaineering during the 1924 Olympic Games that was given to the climbers of the 1922 expedition. In April 1929 Morshead was promoted to the position of Director of the Survey of India's Burma Circle and Morshead and his family moved to Maymyo, Burma. It was here the Morshead's adventures would end. He went out riding on May 17, 1931, and was discovered to be missing after the pony he was riding returned without a rider. His body was found the next day with a bullet wound in his chest fired from point blank range. His murder remains unsolved. Morshead married Evelyn (Evie) Widdicombe in 1917 and they had four sons and a daughter. Two of their sons were killed during World War II. Learn More...