1922 Royal Geographical Society Map of the Vicinity of Mt. Everest 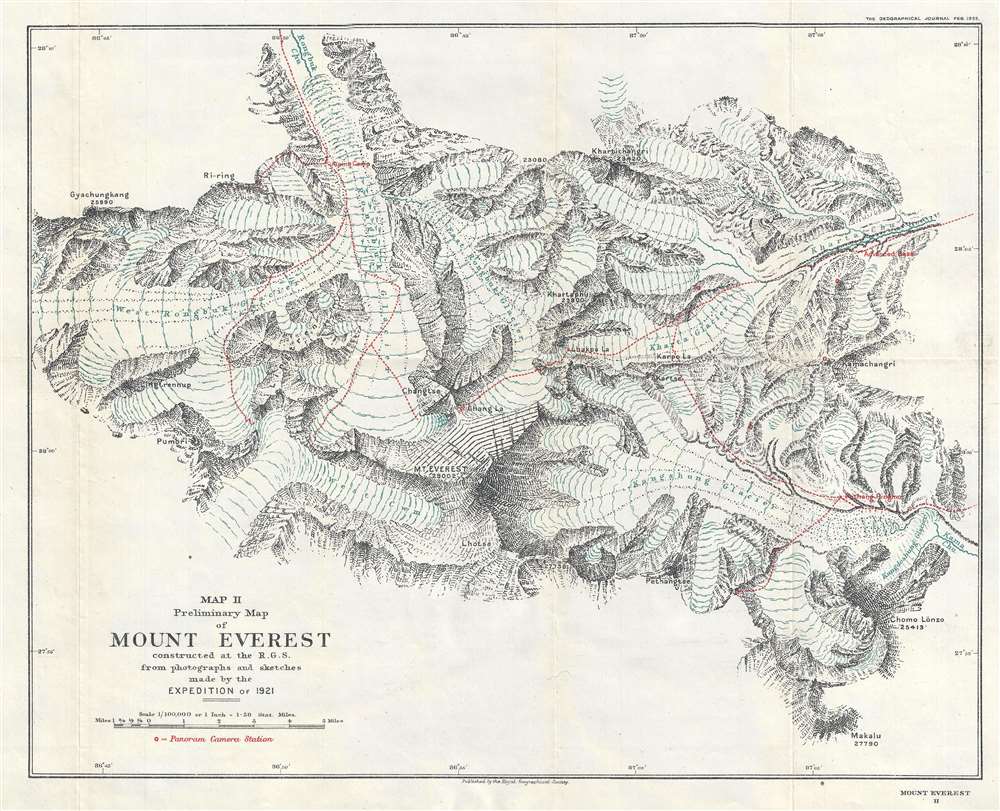 1922 Royal Geographical Society Map of the Vicinity of Mt. Everest

Compiled from photographs and sketches done by the first western expedition to Mount Everest.

This is a 1922 Royal Geographical Society map of the vicinity of Mount Everest. The map depicts the region from the West Rongbuk Glacier to Kharta Chu and from Rongbuk Chu to Mount Everest itself. Compiled from photographs and sketches brought back by the members of the 1921 British Mount Everest Expedition, this is the first obtainable detailed map of the immediate vicinity of Mount Everest. Over one dozen individual photographs were consulted by cartographers at the Royal Geographical Society's headquarters in London to compile this map. Locations where these photographs were taken are noted on the map, along with the routes taken to reach these viewpoints. Camps established by the expedition's members are also noted, as are numerous glaciers and mountain peaks, along with the elevation of the summits.

Due to Mount Everest's location on the border between Tibet and Nepal, the highest mountain on earth had previously been off-limits to western explorers because both Tibet and Nepal forbade entry to foreigners. However, due to the development of a friendship between the Dalai Lama and a British official in India, the 1921 expedition was allowed to enter Tibet. The expedition was even shown great hospitality by local district governors because of a proclamation by the Dalai Lama himself. Once the party reached the vicinity of Everest, the Rongbuk Glacier, West Rongbuk Glacier, and the North Col were explored. Two maps were produced during this expedition: Henry Triese Morshead's (November 23, 1882 - May 17, 1931) map of the region and a photographic survey conducted by Sir Edward Oliver Wheeler (April 18, 1890 - March 19, 1962), which provided the first detailed depiction of the immediate vicinity around Mt. Everest. It was decided that the best route for an ascent would be the Rongbuk - East Rongbuk - North Col route, though the 1921 team was unprepared to make a summit attempt. Even before the 1921 expedition had made it out of Tibet, the decision had already been made to send an expedition in 1922 to try for a summit attempt. A member of the 1921 expedition, George Mallory, would also be a part of the team that went to Everest in 1922 and again 1924. It is believed that Mallory was the first man to summit Everest, although, since he died on the mountain and was never able to confirm his success, Mallory's successful summit attempt is still questioned.

This map was compiled from photographs and sketches by the Royal Geographical Society for publication in the February 1922 edition of The Geographical Journal. We are aware of only one other known copy at the Princeton University Library.