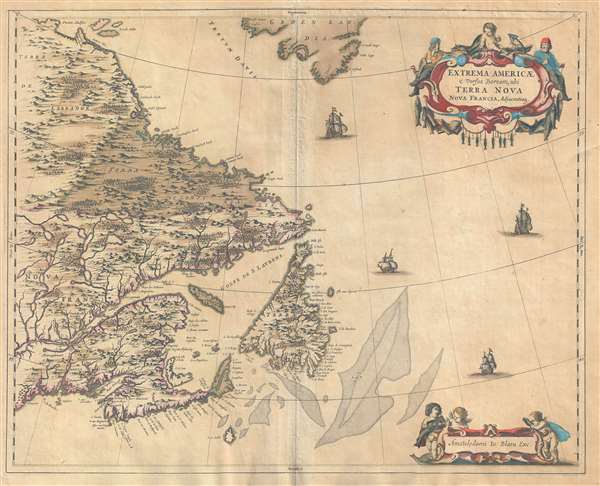 Blaeu's first atlas map to specifically focus on the Grand Banks and the eastern parts of New France.

An old color example of Johannes Blaeu's 1662 map of eastern Canada, including Nova Scotia, Newfoundland, Cape Breton Island, and Labrador. Blaeu based this maps on the great 1632 Nouvelle France map of Samuel de Champlain as well as Dutch East India Company (VOC) maps by Hessel Gerritsz, Johannes de Laet (1630), and Jodocus Hondius (1636). With such distinguished sources, this was one of the most comprehensive maps of the eastern part of New France then available – particularly with its detailed mapping of the lakes to the north of the Saint Lawrence estuary. The focus of the map, the rich cod fisheries of the Grand Banks, here shaded at center, is underscored by the addition of fish and fishermen to the baroque title cartouche in the upper right.

Blaeu introduced this map in the 1662 first edition of the Atlas Major. The Atlas Major added some 185 new maps to Blaeu's extant six volume Theatrum Orbis Terrarum. Of these, the present map was the only one pertaining to North America. Previous to Johannes Blaeu's compilation of this map, this region had been woefully unrepresented in the Blaeu corpus with only the Willem Blaeu's 1617 general map of North America addressing it.

Shortly after this map was issued, the 1672 Great Amsterdam Fire destroyed the Blaue workshop and forced the closing of the Blaeu firm. Between 1662 and 1672 only five issues of the Atlas Major were released, making this map exceptionally scarce on the market. Nonetheless, unlike most Blaeu plates, this plate for this map seems to have survived the Great Fire as evidenced by scarce c. 1700 reissues of the map under the Pierre Mortier and later, the Covens and Mortier, imprints.