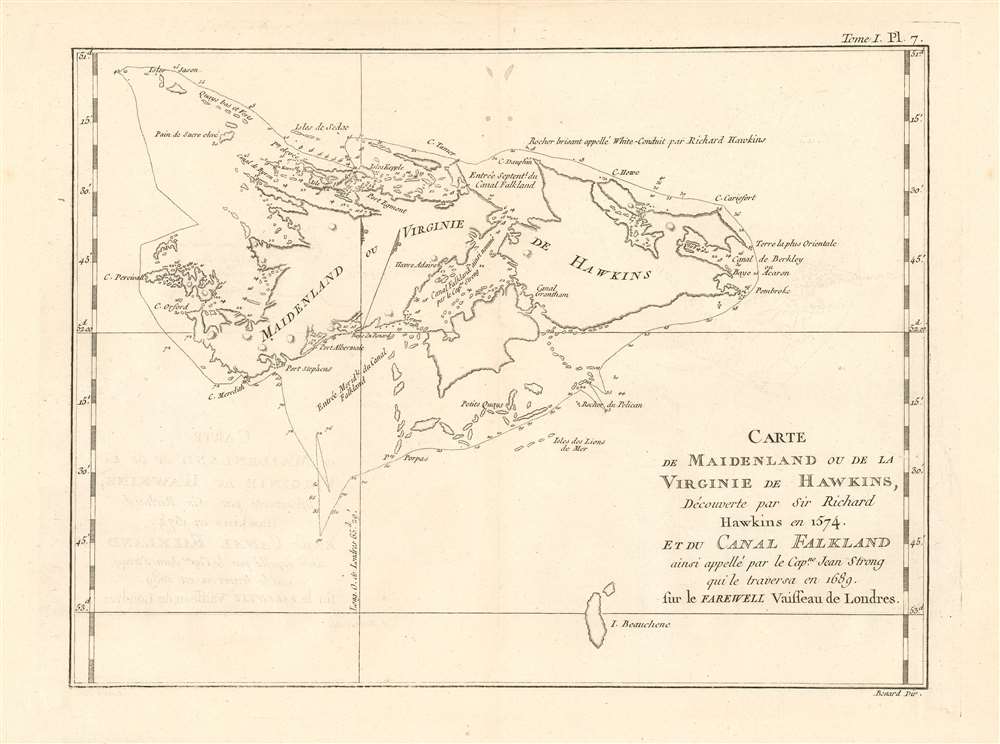 This 1774 Hawkesworth map of the Falkland Islands, or Malvinas shows the charting of the archipelago's waters just as the British were about to withdraw from active possession of the islands in anticipation of the American Revolutionary War. The place name used here, 'Maidenland ou Virginie de Hawkins' refers to the name bestowed on the islands by English commander Richard Hawkins, combining his own name with that of Queen Elizabeth I, the 'Virgin Queen.' (It was later determined that Hawkins had actually sighted only Steeple Jason island, one of the very small islands appearing in the northwest corner of the map.) The archipelago did appear on earlier maps based on the Portuguese, though the attributions of early sightings are uncertain and at odds with one another.

English writer John Hawkesworth's 1773 Account of the Voyages was intended to reveal the travels of three great English circumnavigators of the 18th century: Byron and Mouat's 1763 journey aboard HMS Dolphin and Tamar; the 1767 circumnavigation of Wallis and Carteret aboard HMS Dolphin and the Swallow; and the 1769 voyage of the Endeavor under then - Lieutenant James Cook. This particular chart pertains mainly to the voyages of Byron, despite that Captain's name not appearing on it. Hawkesworth references Hawkins, certainly, as the notional first Englishman to have found the islands. He also refers to Captain John Strong, commander of Welfare, who sailed between the two principal islands in 1690 and called the passage 'Falkland Channel' (now Falkland Sound), after Anthony Cary, 5th Viscount Falkland who had financed the expedition and later became First Lord of the Admiralty. In 1765 Captain John Byron (unaware the French had established Port Saint Louis on East Falkland) explored West Falkland, naming Port Egmont and claiming the islands for Britain. The next year, a permanent settlement was established there. The French abandoned the colony in deference to Spain, who in 1767 formally assumed control of Port St. Louis in East Falkland - renaming it Puerto Soledad (the settlement is omitted from this map.)

In June of 1770, the Spanish commander, Don Juan Ignacio de Madariaga Brought five armed ships and 1400 soldiers from Argentina to force the British to leave Port Egmont. A greater show of British force brought on a standoff: (War was averted by France's refusal to support the Spanish in the conflict.) Following the conflict, Egmont would become a crucial way station for British ships sailing around Cape Horn.

The incipient American Revolutionary War brought on economic pressure, and would lead the British to withdraw from many overseas settlements in 1774. Hawkesworth's English edition of 1773 predates the withdrawal by a year, and that data is reflected on this French edition of the map.

This chart was engraved for inclusion in John Hawkesworth's Relation des voyages entrepris par ordre de Sa Majeste britannique actuellement regnante, in its French edition of 1774. The separate engraving appears to be neglected by institutional collections, appearing catalogued only at National Library of Australia according to OCLC. The full text is well represented in institutional collections.