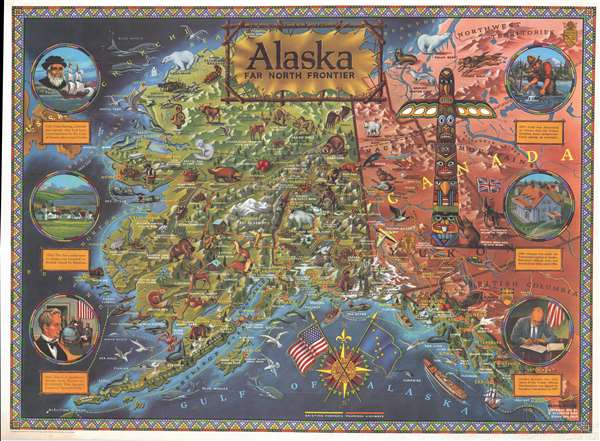 This is a 1959 R. Klegston Rude pictorial map of Alaska. The map depicts the newly-proclaimed state of Alaska from the Bering Sea to the Canadian provinces of the Yukon, Northwest Territories, and British Columbia and from the Chukchi Sea to the Gulf of Alaska. Created in celebration of Alaskan statehood, myriad different aspects of life in Alaska are included. Numerous illustrations of Alaskan wildlife appear on the map, including polar bears, moose, caribou, an arctic fox, a wolverine, several different species of bears, and whales. Alaskan landmarks are labeled, such as Mount McKinley, the tallest mountain in the United States, and the Aleutian Islands. Innumerable locations are labeled, such as Nome, Cordova, Juneau, Seward, and Anchorage. Transportation routes are depicted in two different styles. The existing highways are illustrated using yellow lines, while proposed highways are presented by red lines yellow marks on them. Sea lines are depicted using green dashed lines. Six circular vignettes along the left and right border relate a brief history of the region, from its discovery by Vitus Bering in 1741, to President Eisenhower signing the official proclamation making Alaska the 49th State in 1959. The border, drawn to represent intricate bead work, creates an aesthetic that invokes the native people of Alaska.

This map was drawn and copyrighted by R. Kleston Rude in 1959 at his studio in Studio City, California.

R. Klegston Rude (1910 - c. 1973) was an illustrator and photographer who worked primarily out of southern California. Born in Oregon, he was living in Monterey, California by 1944 and working as a photographer. He had opened a studio by 1959 located in Studio City, California, which provided illustrations and graphics for film industry clients. Rude made at least two pictorial maps, one of Alaska and one of California and Nevada. He always signed his work Kleng Rude. Learn More...