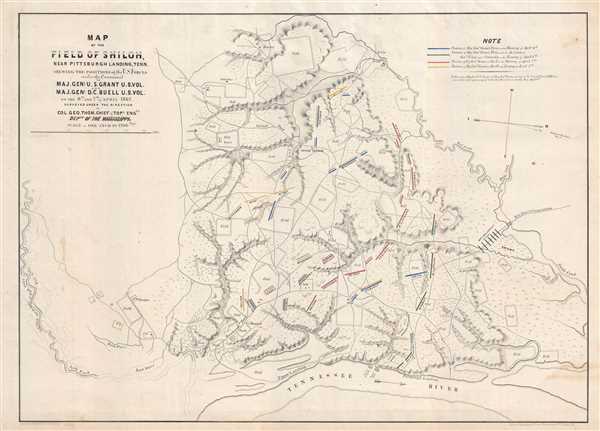 The bloodiest battle in American history until the Battle of Antietam five months later.

This is a separate issue 1862 Otto H. Matz map of Union positions during the American Civil War Battle of Shiloh in southwestern Tennessee. The map depicts the battlefield, which fell on the north side of the Tennessee River near a place called Pittsburg Landing. Here, only Union positions are illustrated, with different notations for their positions in the morning and evening of April 6th and the morning and evening of April 7th. Very little else is noted. Rivers and creeks are illustrated and labeled, along with fields, which bear to other information.

The Battle of Shiloh

The battle, which took place over two days, April 6-7, 1862, was the bloodiest battle in the war, and American history, until the Battle of Antietam in September. General Grant and his men had followed the Tennessee River deep into Tennessee, then a Confederate state, and had encamped near Pittsburg Landing. The following morning, a Confederate force, under the command of General Albert Sidney Johnston surprised Grant's Union troops and nearly routed them. However, Johnston was mortally wounded while leading a charge, and his second-in-command P.G.T. Beauregard took over in his place. Beauregard made the decision not to continue to press the advantage as night fell, electing to continue battle in the morning. Fortunately for Grant, a division of his army and General Don Carlos Buell and his Army of the Ohio arrived overnight. On the morning of April 7th, it was Grant's turn to launch a surprise counterattack and regained the upper-hand. Due to heavy casualties, low food and ammunition, and the loss of the all-important initiative, Beauregard was forced to withdraw and retreat to Corinth, Mississippi, where another battle would take place six months in the future.

This map was drawn by Otto H. Matz from surveys conducted by Colonel George Thomas, Chief of the Topographical Engineers in the Department of the Ohio. It was lithographed by Charles Robyn and Company of St. Louis and published in 1862. While represented in institutional collections, this map is rarely seen on the market.

Otto H. Matz (March 8, 1830 - March 8, 1919) was an American architect and an American Civil War veteran. Born in Berlin, Matz arrived in Chicago in 1854 and became an architect for the Illinois Central Railroad and the Chicago and Alton Railroad. Matz designed the first Union Station built in Chicago, that was unfortunately destroyed by the great Chicago fire of 1871. He served as an engineer in the Union Army during the American Civil War, during which he was a member of the staffs of Generals Fremont, Hallock, and Grant. He worked on the plans fro the capture of Vicksburg and entered the city with General Grant. After the war, Matz returned to Chicago and acted as the school architect of Chicago from 1869 until 1871. After the Chicago fire, Matz participated in the competition for a contract to construct the new city hall and county buildings and won first prize, though he was not awarded the contract. In 1892, Matz was the County Architect and was responsible for building the criminal court building. Matz married Mary Elizabeth Lewis on October 26th, 1857, with whom he had two sons and a daughter. Matz's obituary in the Chicago Tribune that three of his grandsons served in World War I.

Stephenson, R. W., Civil War Maps; an Annotated List of Maps and Atlases in Map Collections of the Library of Congress, 436.
Looking for a high-resolution scan of this?