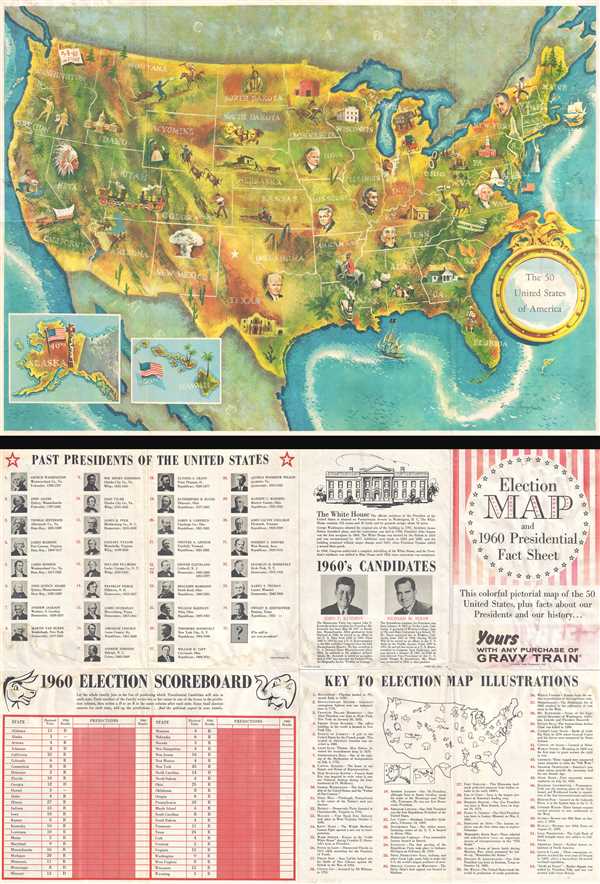 A charming pictorial map of the United States and a fact sheet printed for the 1960 Kennedy-Nixon presidential election.
$450.00

This is an extremely rare 1960 Lorin Thompson pictorial map of the United States. From the verso content, the map appears to have been issued just before the presidential election of 1960, but there is no reference to this election on the map itself. As Hawaii was not admitted to the Union as a state until August 1959, this map was among the first pictorial maps to illustrate all fifty states, depicting the continental United States is depicted from the Pacific Ocean to the Atlantic Ocean and from Canada to Mexico, while Alaska and Hawaii are included in inset maps situated in the lower left corner. Charmingly illustrated, nearly all the states are represented by at least one portrait or vignette. Likenesses of important figures in American history are scattered throughout, including several presidents, such as George Washington, Abraham Lincoln, Franklin D. Roosevelt, and Dwight Eisenhower, along with Lewis and Clark and Sitting Bull. Vignettes illustrating the horseless carriage (the first car), the completion of the transcontinental railroad, Hoover Dam, and the atom bomb highlight American ingenuity. Others, such as a gold prospector, a homesteader, and a soldier from the American Revolution focus on the nation's history. An index of all the illustrations is included on the verso, along with other content.

The verso makes it clear that this piece was printed to mark the 1960 presidential election between John F. Kennedy and Richard Nixon. Information concerning the White House and both candidates is included, along with a list of past Presidents of the United States, that includes their portraits, hometowns, party, and the dates they were in office. A '1960 Election Scoreboard' is also printed on the verso, providing the owner with the opportunity, along with friends or members of their family, to predict the outcome of the presidential election. In table form, the states are listed in alphabetical order and the number of electoral votes and which party they voted for in 1956 are also given, in order to help the players make their final decisions.

This map was created by Lorin Thompson and the whole was published by the General Foods Corporation in 1960.

Lorin Thompson (1911 - 1997) was an American artist and muralist. He is best known for his murals in the U.S. Post Office in Altoona, Pennsylvania, which he created as a project for the Works Progress Administration in 1938. One, entitled Pioneers of Altoona, depicts early settlers building a railroad track, and the other, Growth of the Road, contains images of daily life in Altoona. Another of his murals hangs in the post office in Mercer, Pennsylvania, while a third was commissioned for the Pascagoula, Mississippi post office. The Pascagoula piece was completed in 1939 and, entitled Legend of the Singing River illustrates a local folktale about a tribe of Native American who chose to go into the river and eventually drown instead of facing the wrath of an enemy tribe. This mural was restored in the 1960s when the building became the Pascagoula Public Library. Hurricane Katrina damaged the building in 2005 and the mural was placed in storage. It was re-installed in the newly established Pascagoula Post Office in 2010. Thompson was also the creator and illustrator of the character Ranger Rick for the National Wildlife Federations children's magazine 'Ranger Rick'. Learn More...