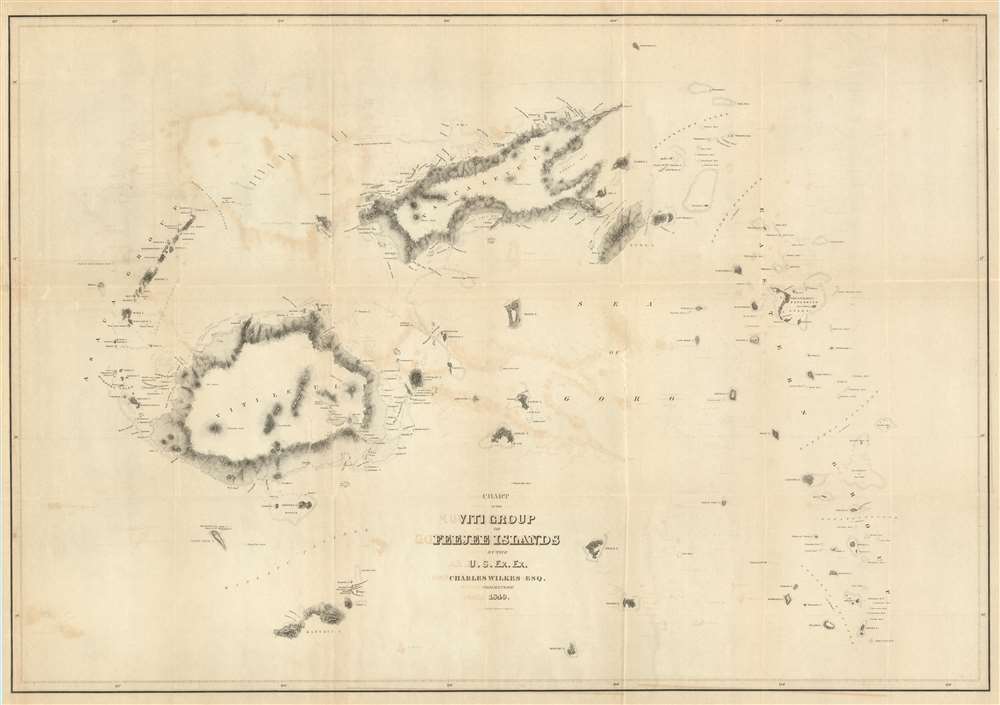 A beautiful example of Wilkes' 1840 map of the Fiji Islands. Considered to be the first accurate scientifically produced map of the Fiji Islands, this map includes three main islands, Vanua Levu, Viti Levu, and Taveuni as well as the Yasawa Group and countless lesser islands. Topography is rendered by hachure and shoals, reefs, and other undersea dangers are indicated with shading.

A survey of the faraway and little known Fiji Group, then known as the Cannibal Islands for the ferocity of its indigenous population, may seem an odd goal for an expedition funded by the U.S. Government, but completing it was in fact one of the primary stated objectives of the U.S. Exploring Expedition. The Fiji Islands were, at the time, the world's largest source of beche-de-mere, or sea slugs. Properly cured sea slugs were a considered a culinary delicacy in China where they fetched extraordinary prices. In the early 19th century the Fijian sea slug trade was largely dominated by merchant captains operating out of Salem, Massachusetts. In the twelve years prior to the launch of the U.S. Ex. Ex. eight ships, five of which hailed from Salem, wrecked on Fiji's little-known reefs. The value of this risky trade prompted the United States government to step in and command a detailed reconnaissance. Wilkes had a particularly difficult time surveying the Fijian Archipelago and lost several of his most valued men to the aggressive and highly territorial islanders. It was here, in retribution for a deadly attack on several of his most trusted sailors, that Wilkes reached the moral low point of his career and commanded retaliatory the Malolo Massacre. Eighty Fijians were slain.

The expedition lasted from 1838 to 1842. Wilkes gained the reputation for being a harsh and dictatorial leader often at odds with his sailors and sub commanders - so much so that some suggest he was the real life inspiration for Herman Melville's characterization of Captain Ahab. Nonetheless, the U.S. Ex. Ex. was a resounding success with long term political and scientific ramifications. Under Wilkes, the expedition surveyed 1500 miles of the Antarctic continent, mapped over 280 islands, explored over 800 miles of the Pacific Northwest, and catalogued over 60,000 plant and bird specimens. Despite his scientific achievements, the end of the expedition Wilkes was court-martialed for the loss of one of his ships on the Columbia River, for the regular mistreatment of his subordinate officers, and for excessive punishment of his sailors. He was acquitted on all charges except illegally punishing the men in his squadron. During this post-expedition period he was also employed by the U.S. Coast Survey, but it was mostly an honorary position with most of his energies being focused on preparing the influential five volume expedition report. Later, during the American Civil War (1861–1865) Wilkes commanded a Union naval vessel in the Trent Affair, a diplomatic incident in which Wilkes intercepted the British mail packet RMS Trent and removed, as contraband of war, two Confederate diplomats, James Mason and John Slidell. Wilkes died in Washington, D. C. on February 8, 1877 at the rank of Rear Admiral. In August 1909, the United States moved his remains to Arlington National Cemetery. His gravestone reads "he discovered the Ant-arctic continent".