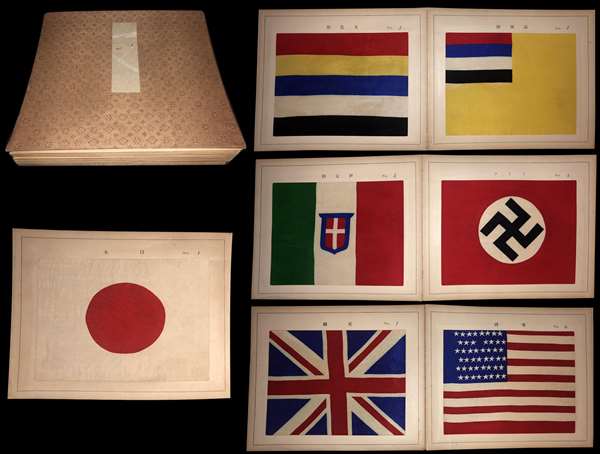 This is a rare Japanese Pre-World War II era sample flag book published between 1937 and 1940. The sample book containing 25 national flags including Japan, Nazi Germany, Manchukuo, the Provisional Government of the Republic of China, England, and the United States, among others. It was issued by the Hiraoka Flag Store (平岡国旗店) of Kyoto. The 25 flags contained in the book are actual cloth flags that have been mounted to cardboard and matted.

The book is undated, but due to the flags included, we can surmise the date based upon the flags as sometime between 1937 and 1940. The swastika flag of Nazi Germany (4) is included, so it must postdate January 30, 1931. The book also notably lacks the KMT Regime flag. Following the Second Sino Japanese War (1937 - 1940), the Japanese puppet regime in Nanjing, the Provisional Government of the Republic of China (中華民國臨時政府), instituted the 'Five Races Under One Union' flag, represented here as Flag 3, and did not recognize the KMT. Similarly, the book includes he Manchukuo Flag (2), a puppet regime established by the Japanese that was active from 1932 – 1945.

This book is rare and we are aware of no other examples.

Hiraoka Flag Store (平岡国旗店, 1887 – Present) is a Japanese flag manufacturing company founded in Kyoto in 1887 (Meiji 20). The firm was founded by Shinjiro Hiraoka (初代の平岡新次郎は) who at the time also ran a Kimono business. Recognizing a demand for flags during the Russo-Japanese War (1904 – 1905), Hiraoka focused his energies on the flag business. He remained in operation throughout the Pre-War and WWII eras and, as Kyoto was never bombed, remains in operation today as Hiraoka Flag Manufacturing Co., Ltd. The company remains in the Hiraoka family.

Very good. Minor soiling and edge wear.
Looking for a high-resolution scan of this?