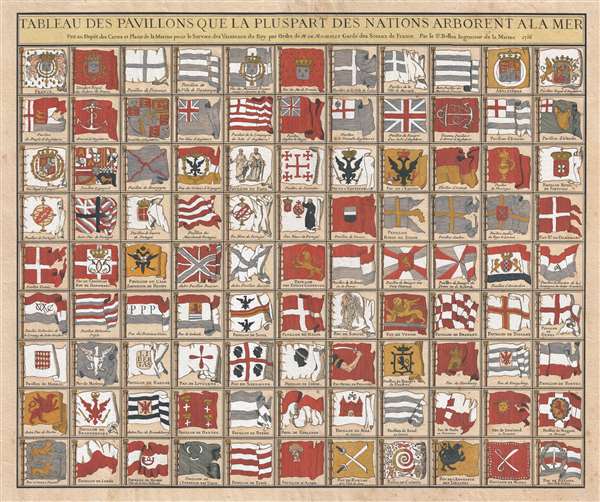 One of the most beautiful and interesting separate issue flag charts we have found, this stunning chart by Jacques Nicolas Bellin was issued in 1756, at the opening of the French and Indian War or Seven Years War (1756 - 1763). The flags represented are unusually large and beautifully engraved. Moreover, this chart, as a separate issue, exhibits no evidence of having been bound into a book or atlas.

The first dated reference to the globe flag seems to be in the 'Schouw-Park aller Scheeps-Vlaggen' or 'Tableau des Pavilions de Mer,' which was published by Pieter Schenk at Amsterdam in 1711. The New England flag is shown hand colored and with the colors also shown by tincture lines, as a blue flag, having a white canton with a red cross and with a globe on a standard in the first quarter of the canton. The globe is outlined in black, but no color is specified. No reference to this globe flag has been found in any contemporary English or American writings…New England had several early flags. The earliest, was the flag of the Massachusetts Bay Colony, a white canton on a red field, of which there are no surviving illustrations. The flag changed c. 1686 to include St. George's Cross and a pine or oak tree in the upper left quadrant. The oak tree was reinterpreted as a globe and the field changed to blue around 1711, when this chart was issued, making one of the earliest, if not the first, printed illustration of the Globe Flag of New England.

This chart features several other rarely seen flags, including the flags of the VOC and WIC, important Dutch merchant trading companies located at left center. Although private commercial ventures, these companies had the military and financial power of independent nations and were often treated as such.

In the lower row, the flag of Empire of China (Sina) stands out. It appears as a great whirlpool surrounded by eight decorations. This is most likely based upon an image of the Chinese flag appearing in Carel Allard's, 1705 Dutch flag book, Niewe Hollandse Scheeps Bouw. In fact, it is a misinterpretation of the Qing flag, a dragon on a yellow field with eight banners. Nonetheless, Bellin, likely having never seen a Chinese flag, interpreted the dragon to the best of his ability.

Other fags pf interest include the flag of the pope, a curious Portuguese flag bearing a priest, the flags of various trading companies, the Flag of the Tartars (dragon), and the arm and saber banner of Poland.

Very good. Light overall toning.
Looking for a high-resolution scan of this?