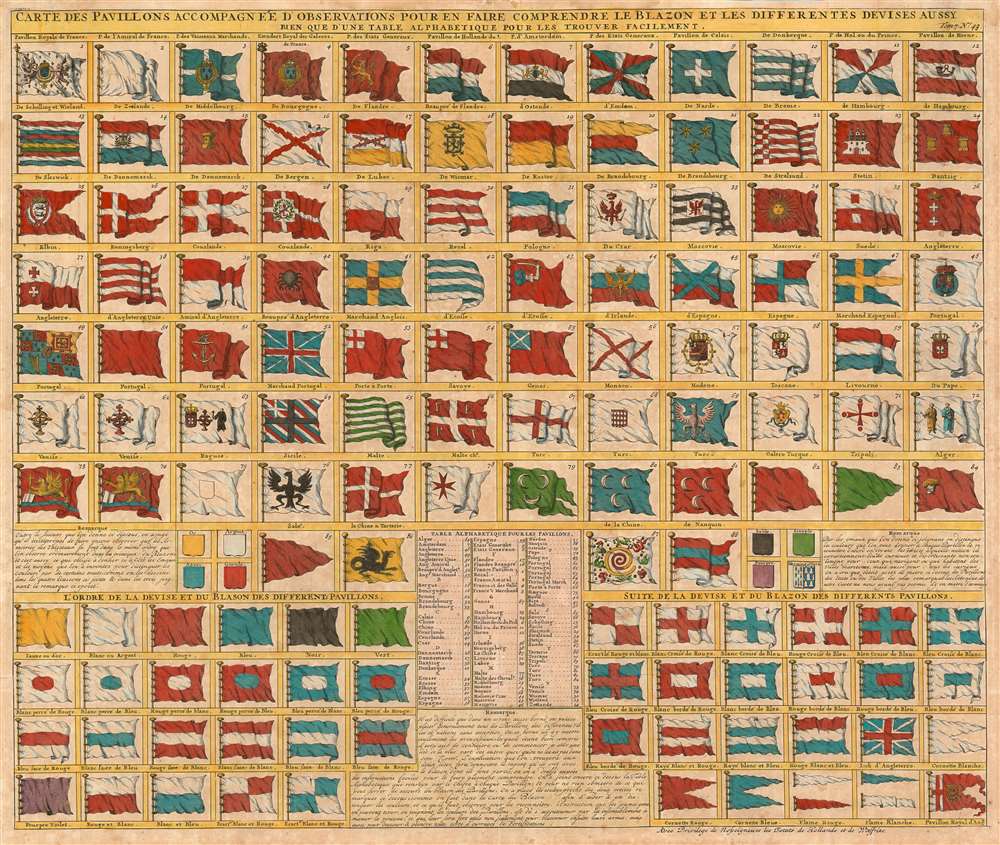 Beautifully engraved and colored chart of the world's flags, with instructions on heraldric conventions.
$1,200.00

This is a 1720 Chatelain flag chart illustrating the world's flags during The War of the Spanish Succession (1701 - 1714) and the Great Northern War (1700 - 1720). The print displays 88 beautifully engraved and colored flags, primarily of European nations. In several cases, more than one flag is illustrated. For example, the French flags include the Royal Flag, the Admiral's flag, the flag of the Merchant Marine, and the flag of the Estates General. Four Ottoman flags appear, not counting the specific flags of Algeria and Tripoli. England is represented by six flags, not counting two for Scotland and one further for Ireland. This chart features several other rarely seen flags: In the lower row, the flag of Empire of China stands out. It appears as a great whirlpool surrounded by eight decorations. This is most likely based upon an image of the Chinese flag appearing in Carel Allard's, 1705 Dutch flag book, Niewe Hollandse Scheepsbouw. In fact, it is a misinterpretation of the Qing flag, a dragon on a yellow field with eight banners. Other flags of interest include pope's banner, a curious Portuguese flag bearing a priest, the flags of various trading companies, the Flag of the Tartars (dragon), and the arm and saber banner of Poland. Courland (Kurzeme, the western part of Latvia) sports both a national banner and a naval flag featuring a black crab on a field of red.

In addition to the actual flags depicted on the sheet, Chatelain provides a primer for understanding a flag's heraldic terminology in general, and supplies the reader an alphabetical table to aid in the location of specific flags on the sheet.

This sheet was printed in the last of the seven volumes of Chatelain's Atlas Historique a monumental work which was published over the course of some fifteen years - the first volume was completed in 1705, the seventh in 1720. Though this sheet does not appear separately in OCLC, the atlas is well represented in institutional collection.

Very good condition. Light wear at folds and general toning.
Looking for a high-resolution scan of this?