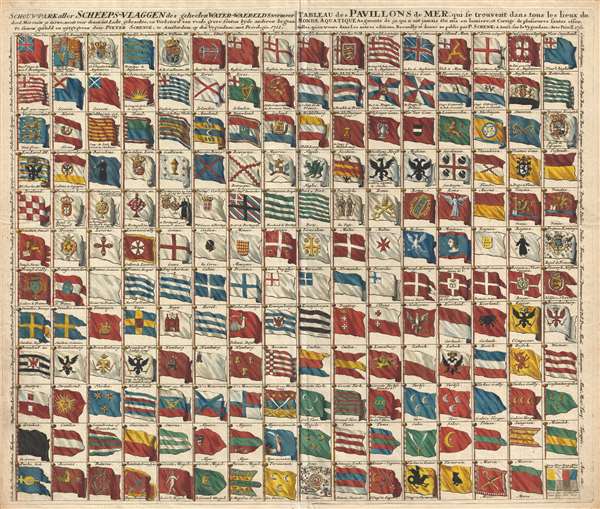 Incudes the New England Globe Flag - one of the earliest illustrations of a purely American flag.

This chart features several other rarely seen flags, including the flags of the VOC and WIC, important Dutch merchant trading companies located in the upper right quadrant. Although private commercial ventures, these companies had the military and financial power of independent nations and were often treated as such.

At bottom center the flag of Empire of China (Sina) stands out. It appears as a great whirlpool surrounded by eight decorations. This is most likely based upon an image of the Chinese flag appearing in Carel Allard's, 1705 Dutch flag book, Niewe Hollandse Scheeps Bouw. In fact, it is a misinterpretation of the Qing flag, a dragon on a yellow field with eight banners. However, Schenk, likely having never seen a Chinese flag, interpreted the dragon to the best of his ability.

This map was issued in Amsterdam by Petrus Schenk in 1711, the last year of his life.