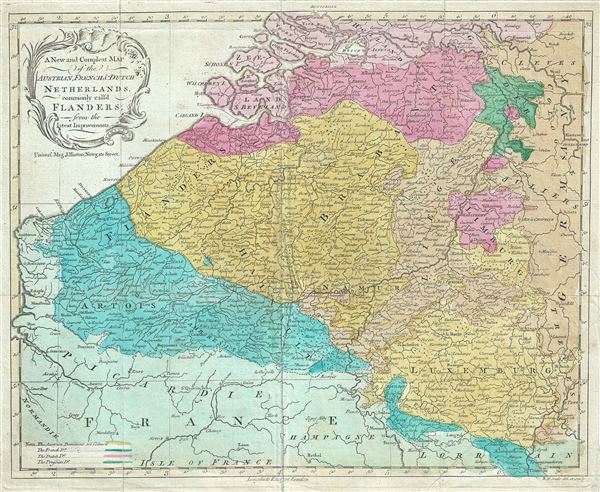 This is an attractive c. 1760 map of Flanders engraved by Richard William Seale. The map depicts modern day Belgium and Luxemburg along with parts of Germany, France and Holland, a region commonly called Flanders at the time. Covers from Rotterdam south as far as Thionville and from Boulogne eastward to Dusseldorf. Includes the regions of Flanders, Artois, Hainault, Luxemburg, Limburg, Brabant, Liege, Juliers, Cleves, Gelder, Holland, Zeeland and Namur and renders the entire region in extraordinary detail offering both topographical and political information, color coding the Austrian, French, Dutch and Prussian dominions.

All in all, a very interesting and attractive map of Belgium to appear in the latter half of the 18th century. This map was engraved by R. W. Seale and published in Universal Magazine.

Richard William Seale (December 1703 - May 25, 1762) was an English a mapmaker and engraver active in London during the middle part of the 18th century. Seale was the son of Richard and Elizabeth Seale. Richard, his father, was a member of the Stationers Company, suggesting that printing and engraving must have been a family trade. Nonetheless, he did not learn the trade from his father, but rather from Samuel Parker of Clerkenwell, to whom he was apprenticed in 1719. Seale was extremely active as an engraver and publisher from about 1740 until his death in 1762. His cartographic corpus is vast; including pieces engraved for most other notable English cartographers of his period: Willdey, Baron, Toms, Rocque, Basire, Bowles, Benning, among others. In addition to cartographic work, Seale also produce numerous architectural engravings. Learn More...

Very good. Some wear along original centerfold and near right margin. Professionally backed with archival tissue for stability.
Looking for a high-resolution scan of this?