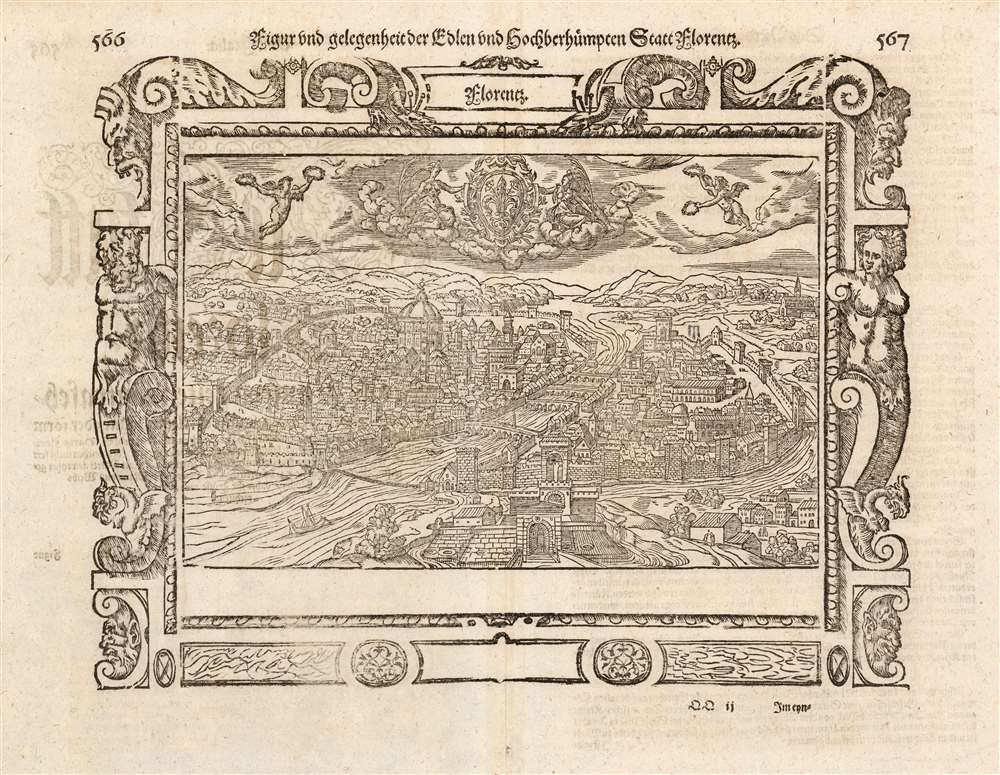 This is a woodcut view of Florence, Italy, included in Sebastian Münster's Cosmographei of 1614. A hub of medieval European trade and finance, Florence was among the wealthiest cities of the fifteenth century and is considered the birthplace of the Renaissance. An architectural and artistic treasure, Florence has been since 1982 a UNESCO World Heritage Site. Consequently, the 16th century city presented here is quite recognizable: the medieval walled city is bisected by the Arno, with four bridges spanning the flood. The Duomo, the baptistery of San Giovanni, and the Campanile are all easily found.

Despite the late date of this example, it was one of the earliest printed views of the city. At the time of its addition to the work in 1572, it was preceded in print only by the view from Hartmann Schedel's 1493 Liber chronicarum and the 1550 view in Münster's Cosmographia which the present work replaced. The same year of 1572 saw the publication of Braun and Hogenberg's city book, which also included a view of Florence - but the two have no resemblance, and one is not a copy of the other. Münster's publishers and heirs, Heinrich and Sebastian Petri, appear to have used the author's original map as the model for this woodcut. The main changes to that view are decorative elements: the ornate border woodcuts, the two winged Victories presenting the city with laurels, and (top and center,) the city coat of arms, flanked by two women with palm branches: also avatars of triumph.

This woodcut panorama of the city of Florence appeared first in the 1572 Latin edition of Münster's Cosmographia, where it replaced an earlier woodcut depicting the city. The woodcut remained in the work throughout the rest of the printing history of the book. Münster's Cosmographia was a popular work, and as many as fifty thousand were printed. While many of these did not survive, individual maps do appear on the market from time to time. The separate woodcut is appears in six entries in OCLC, although the full work is well represented in institutional collections. The typography of this specific example is consistent with the 1614 German edition of Cosmographei.