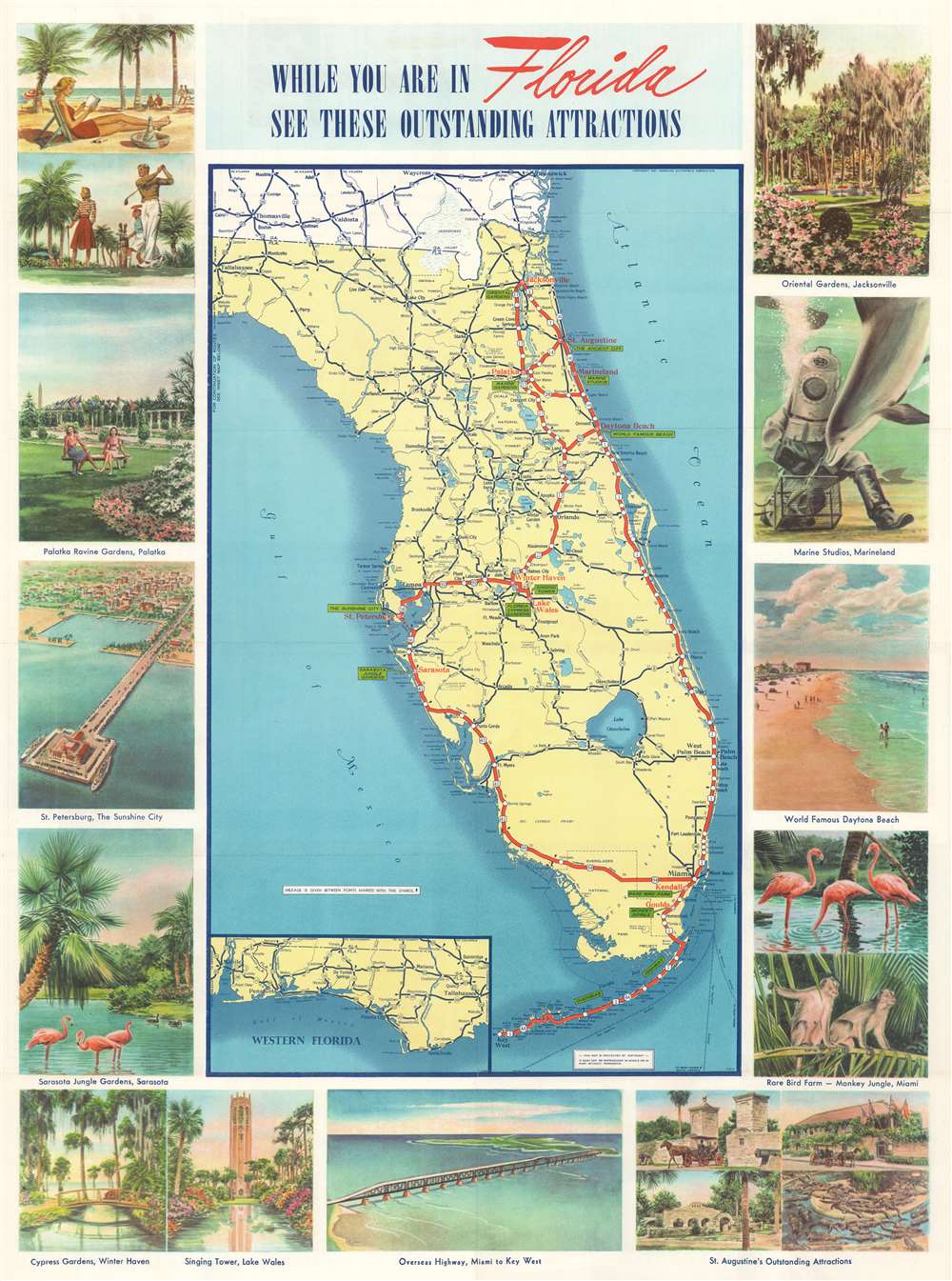 This is a 1941 American Automobile Association pictorial road map of Florida.

As this is a pictorial road map created for tourists visiting Florida, cities and towns throughout the state are labeled along with major state and national highways. AAA also highlights Florida's many lakes and rivers and its state parks, national forests, and the world-famous Everglades. However, the map's visual appeal lies in its artistically stunning border. Vignettes illustrating eleven tourist sites and historic locations around the state, and the ever-popular past times of sunning on the beach and playing golf, create fantasies of adventure and leisure. Green text boxes identify each site featured in the border and situate each amazing destination in relation to each other.

Only a handful of the sites highlighted are still in operation today. The Palatka Ravine Gardens in Palatka, originally constructed by the Works Progress Administration in 1934, are now known as Ravine Gardens State Park, and the Singing Tower, which stands 205 feet, is located in the Bok Tower Gardens north of Lake Wales, Florida. The Overseas Highway, connecting Miami and Key West is still in operation between Miami and Key West. Monkey Jungle in Miami and the Sarasota Jungle Gardens in Sarasota are both still in operation. Although time has changed St. Petersburg, Daytona Beach, and St. Augustine, all three are still major tourist destinations that draw millions each year.

Visions of Past Florida Attractions

The Oriental Gardens in Jacksonville, Marine Studios in Marineland, and Cypress Gardens near Winter Haven no longer exist. The Oriental Gardens were originally started by George W. Clark, a Riverside resident and botany enthusiast, who began planting his overflow plants on a vacant bluff overlooking the St. Johns River. Eventually, his private 18-acre estate would be opened to the public and from 1937 until 1954, served as a major tourist attraction in Jacksonville known as the Oriental Gardens. Today, few remnants of the gardens remain, and most of these are hidden away on private home lots.

Marine Studios, later known as Marineland, was by far the most successful and longest-lived of the now-defunct tourist attractions highlighted here. Founded in 1938 along Highway A1A south of St. Augustine, Marine Studios operated until the mid-1980s, when it was sold by its founder, Cornelius Vanderbilt Whitney. Marineland had been the first-of-its-kind, an attraction that brought ocean animals into contact with humanity through oceanariums and several daily shows. The park was reopened in March 2006 after extensive renovations and is now a subsidiary of the Georgia Aquarium. Cypress Gardens, a botanical garden and theme park, operated from 1936 to 2009 outside Winter Haven. Today, while Cypress Gardens no longer exists, the park is the site of Legoland Florida.

This map was published by the American Automobile Association in the early 1941. A different state of this map, published by AAA in 1940, features the same central map but the border vignettes are completely different.

Very good. Exhibits light wear along original fold lines. Text and printed images on verso.
Looking for a high-resolution scan of this?