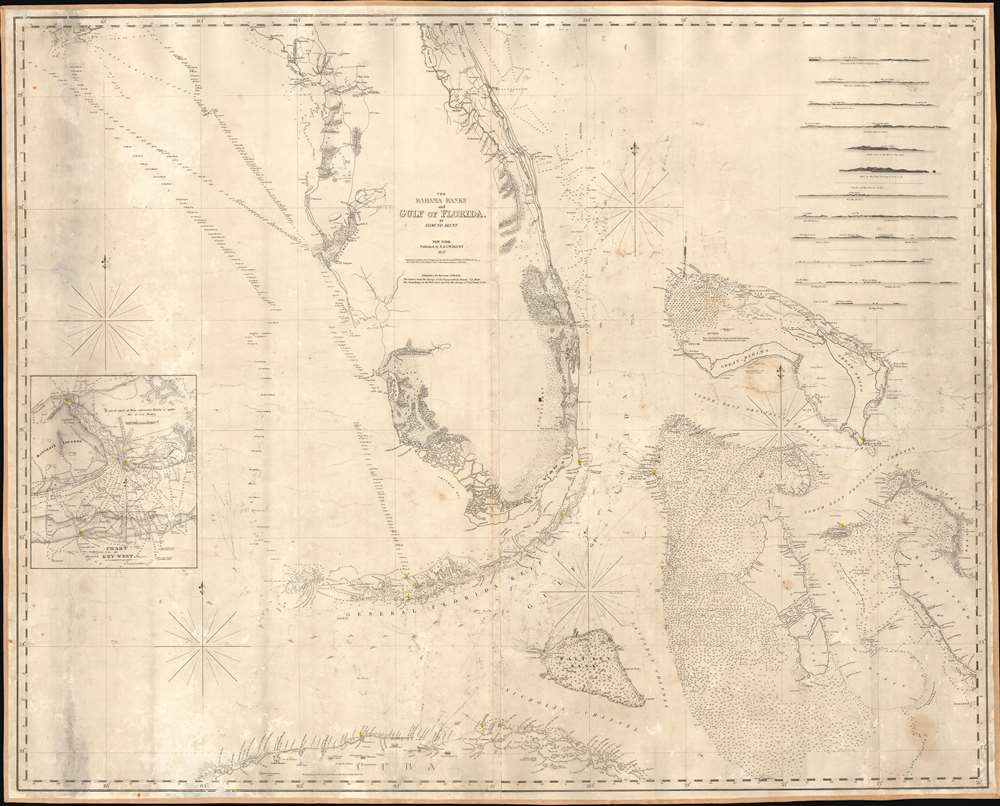 Supplying the Confederacy through the Blockade.

A scarce, detailed, and highly attractive 1847 blueback-style nautical chart or maritime map of Florida and the Bahamas by Edmond Blunt and his sons E. and G. W. Blunt featuring notes and annotations suggestive of use by a Confederate blockade runner. The map offer unique insight into the supply line and trade routes of the Confederacy during the American Civil War. The chart covers Florida from 29°37' N, or, roughly speaking, from the latitude of Lake George south past the Florida Keys (then called the Florida Reef), as far as Cuba and from the longitude of Cape St. George eastwards to include the Bahama Islands. It offers limited inland detail but a fine mapping of coastal regions and countless depth soundings, especially around Tampa Bay, the Florida Keys, and throughout the Bahama Banks - a notoriously dangerous area for ships even with such a fine chart as this. Twelve shore profiles decorate the upper right quadrant.

This chart features copious annotations relating to travel in the region that lead us to believe this chart was used by a Confederate Civil War blockade runner. The annotations are dated only once, on a note appearing in the Gulf of Mexico in 1861. This, and the course of the ship, up and down the east coast, to the Bahamas, passing into notorious smugglers dens like Gun Cay, Great Isaac Cay, and Elbow Key to Matazanas, Cuba, and into the Gulf, lead us to believe the annotations were made by a Confederate blockade runner. In addition, the annotator notably avoids Union strongholds like Fort Dallas (near modern day Miami) and Key West. The navigator also avoids the complications of Havana in favor of Matazanas, a sugar-trading slave-holding city with deep ties to the Confederacy. Throughout there are hard-to-read time-stamps, possibly noting the sightings of Union blockade ships. Between the date and the routes taken, we believe it is highly likely we are looking at a blockade runner smuggling rum, medical supplies, weapons, and other goods from Cuba to the Confederacy.

An inset in the lower left quadrant focuses on Key West and the surrounding reefs. Around this time wrecking - the practice of salvaging from shipwrecks - had turned Key West into the richest city in Florida. Blunt attributes his inset of Key West to George Gauld, a late 18th century British naval surveyor who produced several extensive surveys of the area.

This chart, in the preset iteration, was first published by E. and G. W. Blunt in 1844, although precursor charts date back at least until 1822. Subsequent updates appeared annually through the 1850s. The present example was issued in 1847. Cartographically, the map is derived from the topographical surveys of Colonel Abert of the U.S. Topographical Bureau and hydrography of U.S. Navy Surveyor Commander Powell. The Key West inset is based on surveys by George Gauld. Blunt's chart represents the pinnacle of nautical mapping in and around the Florida peninsula until the work of the U.S. Coast Survey in the 1850s. Scarce.