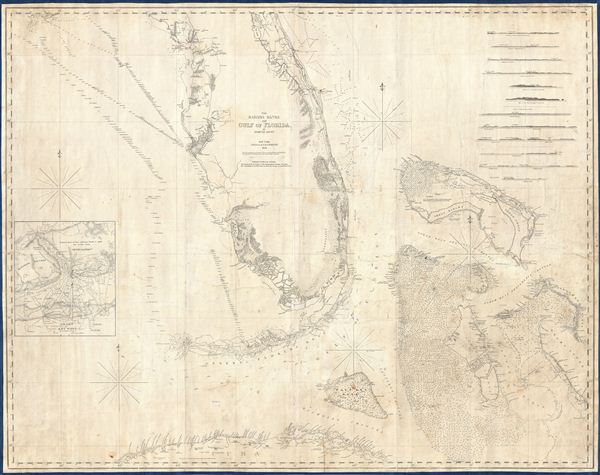 Scarce early American nautical chart of Florida with an inset of Key West.

A scarce, detailed, and highly attractive 1848 nautical chart or maritime map of Florida and the Bahamas by e. and G. W. Blunt. The chart covers Florida from 29°37' N, or, roughly speaking, from the latitue of Lake George south past the Florida Keys (then called the Florida Reef), as far as Cuba and from the longitude of Cape St. George eastwards to include the Bahama Islands. The map features limited inland detail but a fine mapping of coastal regions and countless depth soundings, especially around Tampa Bay, the Florida Keys, and throughout the Bahama Banks - a notoriously dangerous area for ships even with such a fine chart as this. An inset in the lower left quadrant focuses on Key West and the surrounding reefs. Around this time wrecking - the practice of salvaging from shipwrecks - had turned Key West into the richest city in Florida. Blunt attributes his inset of Key West to George Gauld, a late 18th century British naval surveyor who produced several extensive surveys of the area. The remainder of the chart is attributed to the work of Colonel Albert of the U.S. Topographical Bureau and U.S. Navy Surveyor Commander Powell. Twelve shore profiles decorate the upper right quadrant. Blunt's chart, which first appeared in his 10 sheet maritime atlas of 1827, represents the height of Nautical mapping in and around the Florida peninsula until the work of the U.S. Coast Survey in the 1850s.