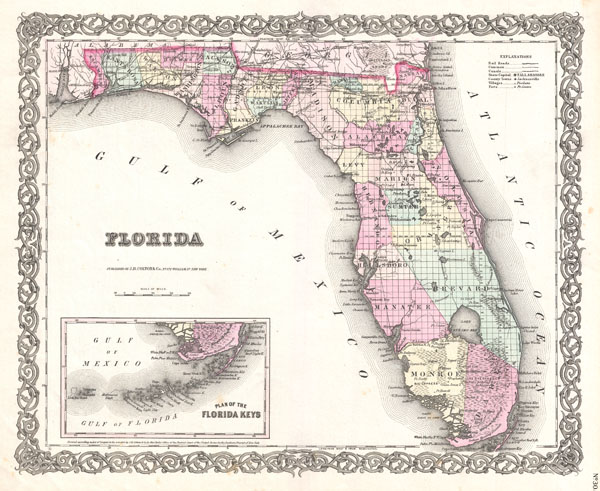 A beautiful 1855 first edition example of Colton's map of Florida. Like most of Colton's state maps, this map is largely derived from an earlier wall map of North America produced by Colton and D. Griffing Johnson. In this particular case, Colton has augmented his map with the plat work done by the Florida branch of the U.S. Land Survey. Of particular interest is the Arredondo Grant which Colton identifies in the northern part of the peninsula. The Arredondo Grant is a layover of the Spanish Land Grant program, which bequeathed it to a powerful Spanish merchant - Arredondo. With incredible difficulty and protest, the land grants were dissolved when Florida became part of the United States. Nonetheless the Arredondo Grand proved tenacious appearing on mappings of this region well into the late 19th century. This map further identifies various cities, towns, forts, rivers, rapids, fords, and an assortment of additional topographical details. An inset in the lower left quadrant details the Florida Keys. Map is hand colored in pink, green, yellow and blue pastels to define county and state boundaries. Surrounded by Colton's typical spiral motif border. This map would prove to be a prototype for a number of maps to follow by such noted cartographers as Johnson and Gray. It is considered to be among the most desirable of all Colton atlas maps. Dated and copyrighted to J. H. Colton, 1855. Published from Colton's 172 William Street Office in New York City. Issued as page no. 30 in volume 1 of the first edition of George Washington Colton's 1855 Atlas of the World.