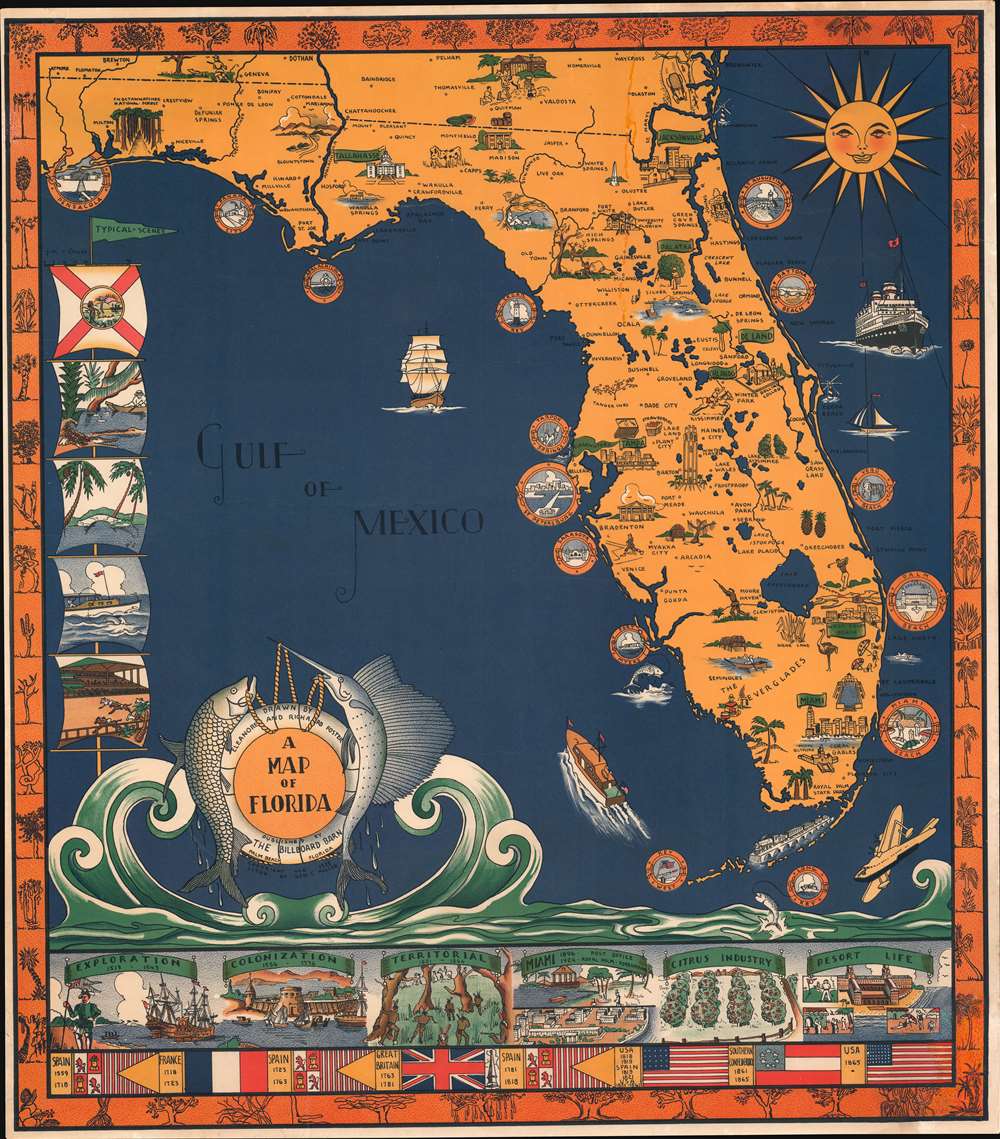 Most spectacular pictorial map of Florida.

A scarce 1935 Eleanore and Richard Foster chromolithograph map of Florida - the most spectacular pictorial map of Florida we have seen. The map is designed on a nautical theme: the sea splashes at the base of the map, forming a cartouche supported by fish and framed by a lifesaver. Coastal cities, including St. Augustine, Daytona Beach, Vero Beach, Palm Beach, St. Petersburg, Miami, Key West, and Fort Meyers, among others, are framed by ship portholes. Smiling from the upper right, the sun shines on the peninsula. Within Florida, both natural resources (pineapples, strawberries, etc.), resort fun (golfing, polo, baseball, sunbathing), and architectural wonders are illustrated. The Overseas Railroad, here in its last year of operation before being destroyed by the Labor Day Hurricane, steams towards Key West. Along the left, Flags illustrate Florida scenes, including alligators and palm trees. A limited breakdown of Florida history appears along the bottom. The border work, in orange, highlights Florida fauna.

This map was published in single edition in 1935. It was drawn by the husband-and-wife team of Eleanore and Richard Foster. The map was printed by the George C. Miller firm and published by 'The Billboard Barn' in Palm Beach, Florida. Rare. We are aware or just 2 known examples, one as here, at the Touchton Library, Tampa Bay History Center, and a second example, with a more restricted color palette, in the collection of David Rumsey.

Richard Thomas Foster (March 21, 1919 - September 13, 2002) was an American architect and illustrator born in Pittsburgh. Foster married Eleanore August Jasper (1916 - 2012) in 1945, after returning from his 4-year World War II (1939 - 1945) tour of duty. He achieved the rank of Lieutenant. After the war, he enrolled at the Pratt Institute School of Architecture, graduating in 1950. He afterwards took a position with the Philip Johnson (July 8, 1906 - January 25, 2005) Firm. In 1962, Foster founded his own firm, Richard Foster Associates, achieving fame as modernist architect. In 1964 he designed the New York State Pavilion, still visible at Flushing Meadows–Corona Park, Queens. He also worked extensively for New York University, designing the Elmer Holmes Bobst Library (1972), Tisch Hall (1972) and the Hagop Kevorkian Center (1973). His own home, the Wilton, Connecticut 'Round House' or 'Circambulant House' was and remains a groundbreaking architectural achievement. The entire house, resembling a glass and steel mushroom, rests on pedestal and rotates to maximize views and light. Foster died in Danbury Connecticut. Learn More...

Very good. Laid on linen poster style. A few closed tears expertly reinforced and stabilized - the larges extending from top border through Florida to about Ocala.