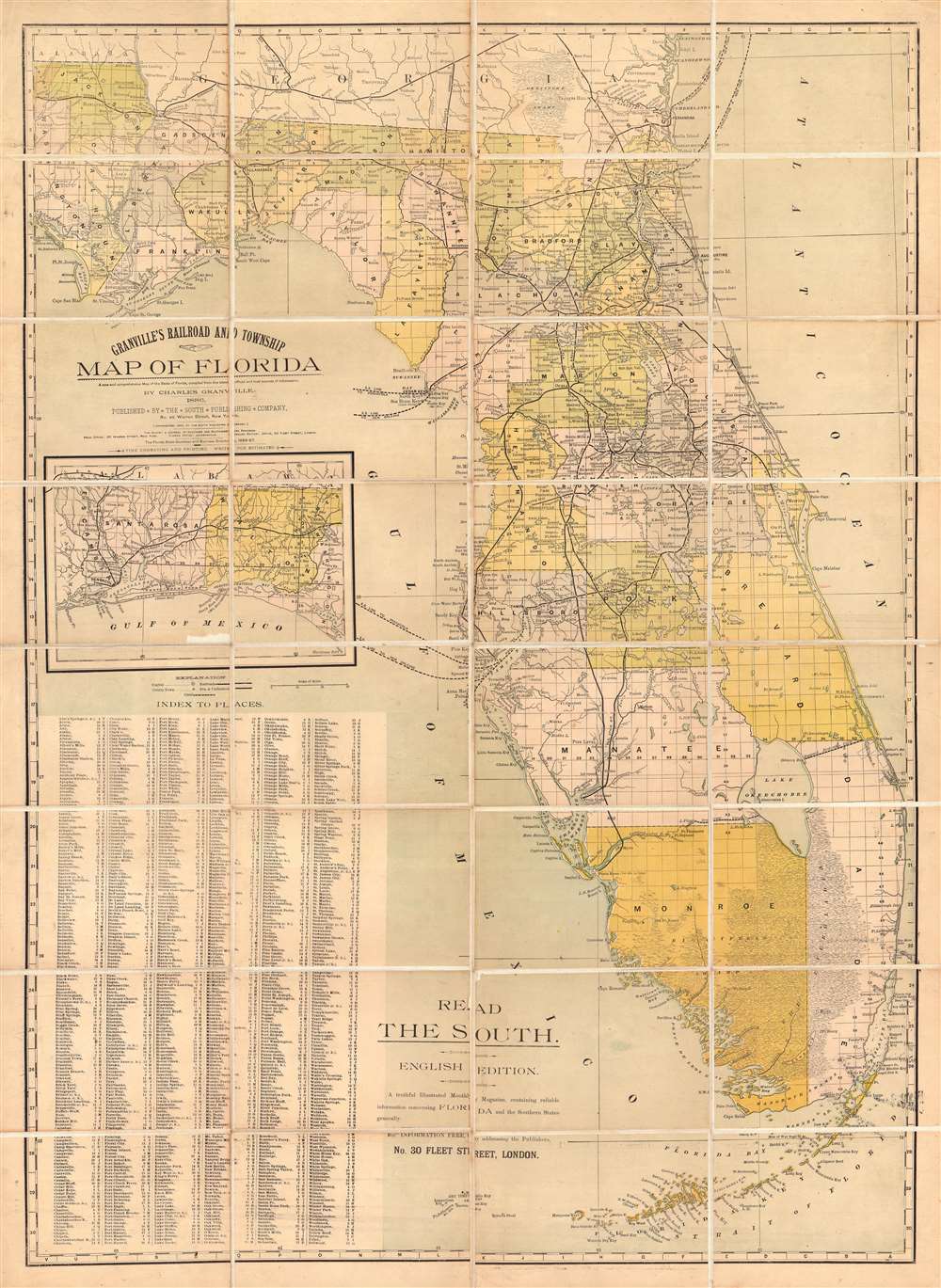 An uncommon 1886 Charles Granville folding pocket map of Florida here in its first English edition. Covering all of Florida, the map divides the state into counties, with an index of place names appearing in the lower right. An inset at left center extends the map west as far as Alabama. The map names Miami and shows a number of railroads in central and norther Florida but predates Flagler's East Coast Florida Railway. Several of the canals proposed to drain the Everglades into Lake Okeechobee are also noted.

This map was published by Charles Granville, probably the nefarious English publisher, and The South, a weekly journal published in England and New York focusing on news related to the Southern United States. There are several editions and states. The first edition appears to have been issued in 1886. The present example bears hastily overprinted stamp at bottom center identifying it as the English Edition and promoting The South. A later edition appeared 1887, and at least one later undated edition was issued sometime shortly thereafter.

The map is very scarce. The OCLC identifies five examples. We are aware of one further example at the Tampa Bay History Center. We are aware of no other examples with the English edition overprinting. There is no history of the map on the private market.

Charles 'Granville' Hosken (c. 1867 - c. 1930) was an English businessman, writer, criminal, and publisher. He was more commonly known under the pseudonym 'Granville.' Granville/Hosken, publishing as Stephen Swift, issued the literary magazines Oxford and Cambridge Review and the Eye Witness and published some of the works of Oscar Wilde. In October of 1912 he was convicted of embezzlement and bigamy, was sent to prison, and his publishing assets seized. Granville/Hosken is an elusive figure of dubious personal character who seems to have been involved in a number of publishing and business scams in London. His association with 'The South' is unclear.


South (1885 - 1891), subtitled A Journal of Southern and Southwestern Progress, was a weekly periodical dedicated to matters pertaining to the U.S. South and Southwest. The firm was based in New York, at 85 Warren Street, but also maintained offices in Jacksonville, Florida, and at 30 Fleet Street London, where an English edition was issued. The firm also published the Florida State Gazetteer and Business Directory for 1886-1887. They also issued several maps, including Granville's Map of Florida. They were initially known as the Southern Publishing Company, but were renamed 'The South' in 1886. The firm appears to have been involved in a number of questionable business practices that included not paying vendors and failing to file proper incorporation firms. The firm, which had offices in London, may have been associated with Charles Granville, a notorious London publisher, fraudster, and bigamist, as they published works together, but this is unclear. Th South went defunct when its offices were destroyed and many of its employees killed in the August 22nd 1891, Park Place building explosion and fire.

Good. Even overall toning. Dissected and mounted on linen in 32 panels.