1862 Johnson and Ward Map of Florida 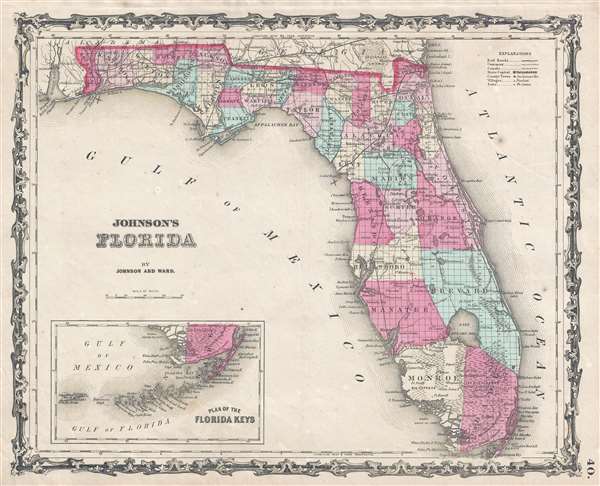 1862 Johnson and Ward Map of Florida

A beautiful example of Alvin Jewett Johnson and Benjamin P. Ward's 1862 map of Florida. This rare map offers a fascinating snapshot of this secessionist state early in the American Civil War. The map illustrates Florida in full, with color coding according to county.

Cartographically, this map is based upon the J. H. Colton chart of 1855, which is itself derived from state and federal Land Survey charts commissioned in the late 1840s to the mid-1850s. It makes numerous references to American Indian tribes and to forts and battles sites related to the recently resolved Seminole Wars (1817 - 1858). It notes Lake Okeechobee, the Everglades, the Indian Hunting Grounds, Biscayne Bay, Tampa Bay and the Okefenokee Swamp. Also illustrated is the proposed course of a canal route between Tampa to the Atlantic.

An inset map in the lower left-hand quadrant details the Florida Keys. The map proper is surrounded by the strap style border common to Johnson's atlas work from 1860 to 1863. Published by A.J. Johnson as plate no. 40 in the 1862 Johnson and Ward edition of Johnson's Family Atlas.