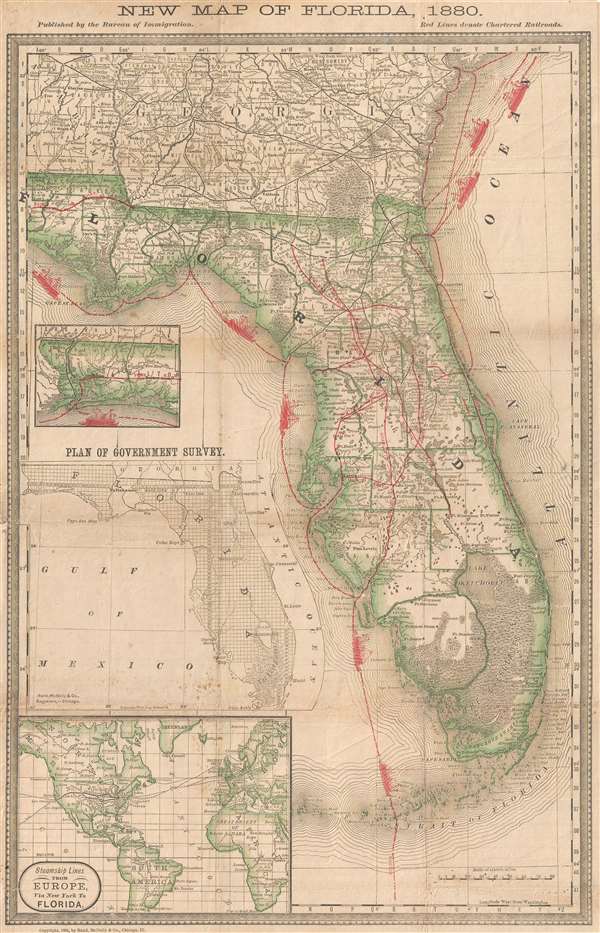 This is an unusual and rare 1881 map of Florida issued by the Bureau of Immigration and Rand McNally. The map covers all of Florida as well as the Florida Keys and adjacent parts of Georgia as far north as Savannah. Red overprinting illustrates steamship lines around and railroads within the state. The rail lines throughout the states are named and include the Midland Rail Way, Charlotte Harbor, Peace Creek, Indian River, Saint Augustine, Gaines, and Johns River Lines. Within the state, towns, creeks, rivers, lakes, swamps, and manufacturing facilities are noted. Sea routes include passages to Cuba, New York, Savannah, and Pensacola. A further smaller map illustrating steamship lines from Europe via New York to Florida appears in the lower left.

This map is rare. We have found no further evidence of this map anywhere. No examples are cited in the OCLC nor have we identified any previous sales records. The map was Commissioned by the Bureau of Immigration and was printed by Rand McNally and Company of Chicago.

Very good. Minor toning on original fold lines. Professionally flattened and backed on archival tissue.
Looking for a high-resolution scan of this?